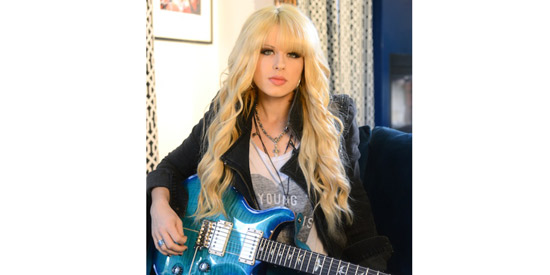 Australian guitarist Orianthi describes Michael Jackson as “a five-year-old kid at heart." She is currently in Manila for a series of shows this August.

Orianthi—who is best known as the guitarist personally handpicked by the late Michael Jackson—is in Manila for her 10-day Every Road promo tour.

PEP (Philippine Entertainment Portal) and other members of the media had the chance to meet Orianthi during her August 19 press conference held at the Hard Rock Café in Makati City.

With an acoustic guitar, she performed her rendition of the Richie Sambora original “Every Road Leads Home To You,” which is her latest single to be released this month.

Orianthi Panagaris spent time with Michael Jackson for his erstwhile This Is It concert series that did not push through when the iconic singer died in June 2009.

When asked by the Philippine media about her experience with the King of Pop, Orianthi admitted: “I was a huge fan of MJ before I started working with him then I got the email to come and audition. I was so nervous. It was probably the craziest moment of my life.”

She recalled her humble beginnings: “The reason why I play guitar was actually because of Carlos Santana. I was able to meet him when I was 18. He got me up on stage and I thought it was just to get my guitar signed by him and I’ll be happy with that but he held me on stage for like an hour.”

Born to a Greek family in southern Australia, Orianthi started playing the guitar at the age of six. Greatly influenced by the legendary Carlos Santana, she would spend hours of learning his solos note for note. And by the age of 15, she left school to pursue her passion. She released her first independent record in 2005 and had an onstage appearance at the Grammy Awards with Carrie Underwood in 2009. Then to her surprise, she was contacted by Michael Jackson for his concert series.

She candidly confessed: “Being chosen, for some reason I don’t know why, but I felt very blessed.”

Orianthi also described Michael Jackson: “He was like a five-year-old kid at heart so he got to joke around all the time."

The 29-year-old guitarist then narrated a funny incident that happened to Michael Jackson while they were rehearsing for This Is It.

MJ was inside a giant spider covered in crystals for one of their production numbers.

"We were playing, I think it was 'Thriller,'" recalled Orianthi. "It was the song that he [had] to come out of a spider. And he couldn’t get out of the spider so he just continued to circle in the spider. Everyone started laughing and he was like, 'Everyone, just stop [the] music. Can somebody help me out?’ That was hilarious. That was one of the memories I had with him.”

Although the actual concert did not push through because of the tragic death of Michael, Orianthi is grateful for the three-month period she spent with the legendary musician.

“I just feel like, I got to perform with him and those moments I had on stage with him was very special to me. I learned a lot from the entire band, too. They’re all good friends of mine. Crazy time but I’m very grateful with that.”

She added, “Working with Michael was pretty surreal every day. At the beginning of the process, I couldn’t tell anybody that I’ve been chosen so I would go in for rehearsals and then go home and pick up dog poop, and talk to my friends, do normal things, but I couldn’t say anything to anybody.

"I was playing ‘Billy Jean’ and MJ was right next to me dancing.”

Orianthi has also had the chance to play with other well-known musicians such as Steven Tyler, Alice Cooper, Richie Sambora and Carlos Santana.

“It’s really cool when you get to meet your idols and their great people and I like that. It makes you admire them more.”

She wants to encourage aspiring artists and musicians. “I say never give up. Just continue on and if it’s your thing, music, that’s your calling in life, don’t let anyone tell you ‘you can’t do it,’ that’s the thing. When I was going through school, one of my teachers said to me, 'You probably pick up the harp, coz it’s more feminine.' I said, 'No, I wanna play guitar.'"

When asked about her plans here in the Philippines, she told the press that she wants to try chicken adobo.

She also disclosed, “My friends are gonna show me around, they’ll gonna direct me where to go. I definitely wanna do some shopping, sightseeing, and all that kind of stuff. I get to have a couple of hours off, see what’s going on and check out the place. I’m excited to learn more about Manila.”

Orianthi is set to perform in several venues in Manila until August 27 in line with the release of her very first Best Of… record which is being released in Japan this month.

In Manila, Orianthi holds special performances on the following dates: August 25 at the 19 East at Km. 19, East Service Road in Sucat, Paranaque and August 27 at the Hard Rock Café in Makati.

She will also have a radio interview with Captain Eddie on August 23; a guest on GMA-7’s variety show Sunday All Stars on August 24, and MYX music channel on August 26.