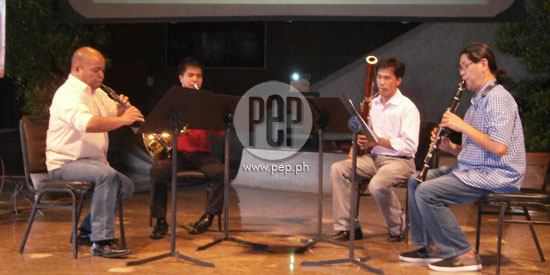 Soloists who will take part in the November 14 concert perform a teaser musical piece for the press. They include (L-R) Reynato Resurreccion Jr. playing the oboe, Jay-Ar Mesa on the French horn, Adolfo Mendoza on the basoon and Ariel Sta. Ana playing the clarinet.

Why is there a decline of interest in classical music?


"Technology these days is causing—especially with the younger generation—a very short attention span. I think this really is the essence of the problem," answered Maestro Olivier Ochanine, the musical director spearheading the Philippine Philharmonic Orchestra (PPO) 2014-2015 concert season dubbed as Sound Kaleidoscope.

In a recent press conference held at the Cultural Center of the Philippines (CCP) main lobby, the French-American conductor expressed his opinion why the youth today does not seem to be inclined towards classical music.

"When you listen to things like Taylor Swift, Anne Curtis, Daniel Padilla or whatever you have, the songs are like three minutes long and they are infused with routinal gyrating on stage, there's a lot of things going on which gets them excited... You do not have to think so much to listen to these songs. They are for entertainment.

"Entertainment has different meaning or different qualities, some entertainment is just lazy entertainment where you just want to sit and you just really want to be entertained and you don't want to do anything else. This kind of music that we present, it is entertainment but a different kind where invite the listener to experience, to think and to imagine, to live vicariously throught the composer or the musician..." Ochianine further clarified.

Ochianine, together with the PPO, seeks to educate the young and show them the value of music and arts. With the rise of pop culture worldwide, classical musical has been swept aside and the genre has yet to break free of its stigma of being only for the elite.

"I don't want to sound elitist because people are quick to judge but we serve an educational purpose in a sense that we want to raise awareness with what people can experience, how music can help develop their lives... We want the younger generation to expand their thinking through music," said Ochianine.

A member of the press pointed out that the London Symphony Orchestra did a classical arrangement of the music of the heavy metal band Metallica and suggested that the PPO could do the same with local bands like the Eraserheads in order to reach the younger audience. Ochianine was quick to agree to this suggestion.

SOUND KALEIDOSCOPE. Musical director Ochianine will lead the Philippine Philharmonic Orchestra for this year's concert season that will begin this September and end by April 2015.

"Every time you listen to a piece, you're a different person to begin with. Music is not just music on the paper, everytime we hear it it's a different experience. The same thing with the kaleidoscope, you have the same thing in your hands but when you turn it this way or you turn it that way you see something differently... This could be representative of any season, but I put it in this season because I find that we have a lot more variety in terms of orchestral colors" explained Ochianine.

This season will feature eight major concerts featuring the Philippine Philharmonic Orchestra together with world class musicians both from the local scene and abroad and will run from September 12, 2014 - April 24, 2015. All the concerts will be held at 8PM at the Tanghalang Nicanor Abelardo CCP Main Theatre except for the January 23 concert which will be held at the Meralco Theatre.