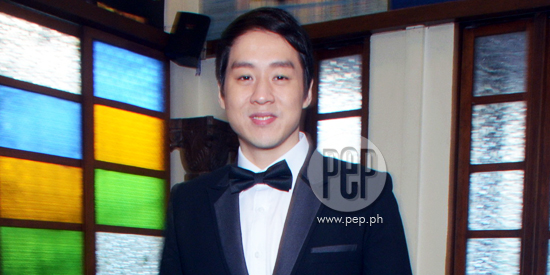 Richard Poon will give a modern jazz feel to the classic hits of Burt Bacharach for his upcoming album to be released this 2014.

Richard dished out details about his still untitled album during his interview with PEP.ph (Philippine Entertainment Portal) and other members of the media last August 9 at Robinson’s Place Manila. The singer was part of the 2014 United Fashion Show held that day.

“I think this is the best album I’ve ever done kasi even my executives are raving about it,” Richard told the press about his upcoming album to be released under MCA Records.

“I never had that response yet so it’s a mixture of, lahat popular, e.”

The 40-year-old singer mentioned some tracks that may be included in his newest album. These are: “Raindrops Keeps Falling On My Head,” “Alfie,” “Arthur’s Theme,” “A House Is Not A Home,” “I Say A little Prayer,” “The Look of Love,” “Don’t Make me Over,” “Walk on By,” and “What the World Needs Now.”

Aside from singing the tracks, Richard was also proud to reveal that he also had input when it comes to the arrangements of the songs.

“‘Tsaka kalahati rin, nag-a-arrange din kami, I arrange also with them so maganda…”

The singer promised that he will release snippets of tracks from his upcoming album on his official Instagram account.

“You can hear na already the new album there. Maganda.

Have they already chosen the title of his upcoming album?

“All of the most, sikat, pinakasikat.”

He continued, “Imagine na yung song na ‘Always something there [to remind me]’ that is Bacharach!

“‘Tsaka ‘You’ll never get to heaven if you break my heart.’”

Richard also tries to veer away from versions released during the New Wave music era of the ‘80s. Instead, he wants to give a modern jazz feel to the classic hits.

He said, “Sa ngayon, we try to arrange it.

The ASAP Sessionista mainstay assured his fans that he will bring something new on the table and give make the songs like his own.

“So im very proud of the album.”

Richard added, “I think it will… I hope ‘pag binigyan kita ng album, you’ll listen to it and say, ‘Oh my god, I wanna buy this and give it as a gift for my mama, papa, my tito!’ kasi wala kang itatapon.

“Ayokong may album na, alam mo out of the 12, one or two tapos yung 10 itatapon mo na lang.

Richard’s album will be released sometime in September or October 2014.