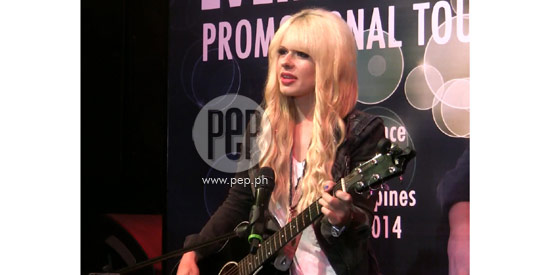 Renowned guitarist Orianthi ended her ten-day Manila promotional tour with an intimate performance at the Hard Rock Cafe and a meet-and-greet session with fans.

Orianthi, who is best known for being Michael Jackson’s guitarist in his erstwhile This is It concert series, gave her Filipino fans a superb rock and roll night at the Hard Rock Café, Makati City last August 27.

The internationally acclaimed singer-songwriter guitarist recently had a series of shows and appeared in several TV & radio shows in the Philippines. The 29-year old musician ended her ten-day Manila promotional tour with an intimate performance that was followed a meet & greet session with her avid fans.

Orianthi’s set list included the Carlos Santana original “Europa” that made audiences go wild; the Stevie Wonder original “Superstition,” her collabration with Dave Stewart titled “Heaven in This Hell"; her rendition of the Jimi Hendrix song “Voodoo Child” and her latest single “Every Road Leads Home to You,” which is a Richie Sambora original.

Orianthi also performed songs from her 2009 album Believe: “What’s It Gonna Be” and “Think Like a Man” as well as tracks from her 2013 album Heaven In This Hell: “Sex E Bizarre”, “How Do You Sleep” and part of her Best of album recently released in Japan, “Better with You.”

Orianthi’s passion for the strings was greatly influenced by the legendary Carlos Santana and with enough support from her dad who bought her first guitar at an early age, she would spend hours learning her idol’s solos note for note until she got a chance of a lifetime: being handpicked by the late Michael Jackson for his-unfortunately-last performance/s.

When asked during her August 19 press conference what’s on her playlist, she pointed out: “It’s pretty diverse. I love the blues. I love the country. I love every kind of genre of music. Doesn’t really matter what it is, if it’s a good song. I kind of gravitate towards the blues or country songs because of the lyrics and how it really tells a good story. For me, that really draw me in.”

Her music indeed has a touch of the blues, country and, of course, rock & roll. In addition, she is a gifted guitarist who can boast of sultry vocals.

Orianthi plans to come back next year and she wants to be accompanied by former Bon Jovi guitarist Richie Sambora.

She promised her fans during her last night in Manila: “I’ll be back pretty soon. I’ll be bringing Richie Sambora with me too.”