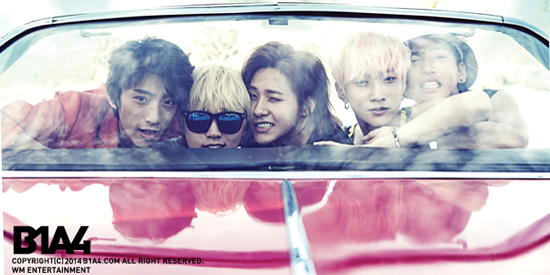 Debuting with “OK!” in 2011, the South Korean boy group B1A4 showcased its fresh and carefree image early on. The K-pop group is composed of typical boys-next-door: charming and good-looking, yet also have this friendly aura surrounding them.

Composed of CNU (vocals, rap), Jinyoung (leader, vocals) Sandeul (main vocals), Baro (main rap) and Gongchan (vocals), B1A4 is well-known for having pretty boys who are comparable to comic book characters. In fact, the group even had a webtoon before their debut.

Three years after their group's creation, the boys will finally be able to showcase their talents on a wide scale as they embark on their first world tour called 2014 B1A4 ROADTRIP—READY?

The members of the South Korean boy group B1A4 will hold their Manila concert on September 6 at the Smart Araneta Coliseum.

Known not just for their looks but also their talent, these flower boys were able to top three major charts and sweep awards from three major broadcast companies in South Korea for their song “Lonely.”

They were hailed as 2011's Hot Debut Star in SBS MTV Best Of the Best. In 2012, they were chosen as the Best Male New Comer in the Gaon Chart Awards. They won the Disk Bonsang award in the 27th Golden Disk Awards held in 2013.

B1A4 earned both the Popularity Award and Bonsang Award in the Seoul Music Awards and 28th Golden Disk Awards this 2014.

And if that’s not enough to make you see these boys live, we give you five more reasons why you shouldn’t miss B1A4’s Road Trip in Manila Tour:


1.) Their fun and upbeat songs. Their songs are mostly in dance-pop genre coupled with easy to follow dance steps.

Sandeul's soulful vocals balance Baro's deep and husky rapping voice. Jinyoung's unique voice adds variety to the tracks. CNU's calm vocals blend well with the group, be it singing or rapping. The youngest Gongchan then smoothly harmonizes with the rest of the members.

2.) Their expressive and candid lyrics. B1A4 tells it like it is. Their songs let you go on a trip inside a guy’s mind, unveiling his sentiments.

An example is the track “Only Learned Bad Thing.” It tells the story of a boy who doesn’t know much about love, leading him to unintentionally hurt the girl he loves.


The lyrics go: “What would I become if you cry at my common mistake of words / I don’t think I can comfort you with ‘I love you’ anymore / Because I only learned bad words, bad actions and don’t know your heart / Something always gets twisted / I’m sorry, I’ll do better / I’m sorry, don’t be mad, I was wrong.”

B1A4 also released a song titled “Baby Good Night.” The track is about how men turn into players when their girlfriends aren't around.

The lyrics go: “Tonight, I will deceive you just for today / I will go back when the day passes / Tonight, even if I don’t respond or if I respond late / Even if you hate me, please overlook it.”

3.) You’ll fall for their prince-like image. Unlike their “beastly” counterparts, who have all bared their bodies and showed off their abs, BANAs (the term for B1A4 fans) go head-over-heels for the boys even when they’re fully covered in suits and coats.

During their guest appearance on MBC’s Weekly Idol, the boys have been described as “sweet like candies” and someone who can bring out the feeling of “spring.”

Together with their good looks and generosity, as shown in their numerous charity works and donations, they’ve set themselves as examples of modern-day well-mannered gentlemen.

Reminds us of the good-natured “Prince Charming” characters we used to read about in storybooks. They’re pretty much the kind who can make you feel like the leading lady in a fairy tale love story.

4.) They’re hardworking. In an interview with kpopstarz.com, the boys once mentioned they almost gave up trying to win awards in music shows.

"We decided to give up expectations and empty our minds. We are actually honored to share the stage with legends who have paved the way for us. Maybe they will like us if they see us doing our best to do our music."

The boys then continued to perform with all their hearts. Two years after, B1A4's song finally topped the charts.

It took a while before they were able to finally bask in the limelight and earn their well-deserved first win with their song “What’s Happening” last May 18, 2013 in the weekly music program Music Core. The boys became emotional while accepting the award.

The boys cried and hugged each other while trying to finish their speech.

Member Sandeul reveals, "When we first debuted, we were really lacking and we worried a lot about how we'd move on... Thank you so much for standing by us without changing despite it all. We'll do better, everyone. Thank you."

Coming from humble beginnings, until now B1A4 still never forgets to bow down to their seniors, smile at their fans, and just continuously try to improve their performances.

5.) The Bean Sprout Dance. Before being named “sprout-dols,” B1A4 was once dubbed as "countryside-dols” because the boys resided in South Korea’s rural areas before their debut.

Jinyoung and CNU are from North Chungcheong province, Sandeul is from Busan, while Baro and Gongchan are both from South Jeolla province.

The boys were also called “blood-dols,” a word play from their group name being formed after their blood types (only member Baro is type B, the rest is type A, hence B1A4.)

In an effort to distinguish themselves, the group created the “sprout dance,” which was seen on the TV show Quiz to Change the World.

The dance was well-received by the public and it quickly became popular, especially their fans called BANAs.

Imagine seeing them sway their hips left and right with a blank expression. Wouldn't it be amusing to see the boys perform this quirky dance in person?

Catch this charming group live! B1A4 will hold its Manila concert on September 6 at the Smart Araneta Coliseum.