6 things we learned about the Eraserheads from Esquire 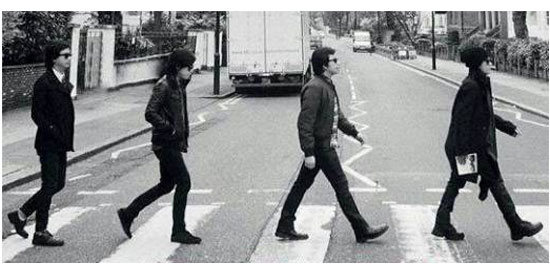 The Eraserheads are photographed crossing Abbey Road, recreating The Beatles' 11th studio album released in 1969. The band's new singles in 13 years are included in the September 2014 issue of Esquire Magazine. (To view photos of the band members playing Eheads songs, CLICK HERE)&lt

Esquire Magazine made pop culture history when it was able to bring together the members of the Eraserheads to collaborate for two new compositions.

“Sabado” and “1995” are the first new songs composed and recorded by the Eraserheads since their breakup over a decade ago, specially commissioned by Esquire.

In 1989, the Eraserheads was formed by Ely Buendia, Raimund Marasigan, Buddy Zabala and Marcus Adoro while they were studying at the University of the Philippines.

Also known as the Eheads, the iconic Pinoy band became popular for hits such as “Ang Huling El Bimbo,” “Alapaap,” “Pare Ko” and “With a Smile” before the band's break-up in 2002.

In the September 2014 issue of Esquire, editor-in-chief Erwin Romulo gave an in-depth account of the Eraserheads' London tour. In his article titled “Looking for Ligaya in London,” Romulo was able to interview the band members as they geared up for their concert in the United Kingdom last April.

Here are 6 things we learned about the Eraserheads from Esquire:

-- Ely Buendia admits he gets embarassed by his earlier songs.

Now 43 years old, the main songwriter and lead singer Ely Buendia feels somewhat embarrassed when he recalls the lyrics that he came up with while he was just starting out in the Eheads. He cites “Toyang,” which is included in the band’s 1993 debut album UltraElectroMagneticPop!

Ely: "It's a mixed bag. You can't avoid feeling a little embarrassed with the lyrics. Yung mga early stuff like 'Toyang.' For a long time, I would just hate it. There was a point in time when I didn't want to be identified with it in any way, because I felt like I was doing something more substantial and that I was improving, and it kinda pissed me off na kung kelan ako more confident about my work, everyone was still concentraing on what I'd done before."

-- Ely Buendia believes they were able to handle their breakup rather well.

When asked if they consider each other as friends, the famous frontman answers, "Of course we are.

"I think we've handled all that animosity or the bad blood better than any other band that you can actually name."

-- Raymund Marasigan reveals that his band Sandwich helped him to forgive.


Raymund: "Before the first reunion, magkaaway pa kami eh. We weren't cool. But I spoke to Sandwich and they said, 'No, you take this, but if you do, you should 'squash the beef.' You have to forgive. We will not allow you to play nang may galit ka. Because everybody will know. Kung bad trip ka, that will translate in the music and we will not allow you to do that.' That's not punk rock, that's not rock and roll. Obvious yun when you're playing."


-- Raymund recalls the day when he reconciled with Ely.

Raymund and Ely patched things up during their initial rehearsal for the first Eheads reunion concert.

Raymund narrates what happened during their rehearsal, "I think I came by myself. It was nerve-wracking 'cause I didn't know if I was gonna shake his [Ely’s] hand or punch his face. Kasi yung away naman namin were all personal. We didn't discuss it with anybody except our closest friends."

He then went on to describe how he finally shook hands with Ely.

The reunion concert was held on August 30, 2008 at the Bonifacio Global City. However, it was cut short when Ely experienced chest pain and had to be rushed to the hospital.

The band reunited for their second concert dubbed as The Final Set on March 7, 2009 at the SM Mall of Asia Concert Grounds.

-- Raymund considers the Eraserheads as his friends but not barkada.


-- It took them five tries before they finally achieved the shot used on the cover of Esquire.

The current cover was photographed by Jake Verzosa and designed by Ces Olondriz. Esquire editor-in-chief Erwin Romulo, who served as floor director of the shoot, recalls the hurdles that they had to overcome in order to mimic the now-famous shot.

After five tries, they were finally able to capture the shot with the Pinoy band members crossing Abbey Road, recreating The Beatles' 11th studio album released in 1969.


Last Thursday, September 4, Esquire celebrated the launch with Ely Buendia, Raymund Marasigan, Buddy Zabala, and Marcus Adoro in attendance. During the event, they got together and performed popular Eraserheads songs "Magasin" and "Alapaap."

Note: The print cover price of Esquire’s September issue inclusive of a CD bearing the Eraserheads’ latest recording is P400.

ONLINE PURCHASE. Two new Eraserheads’ tracks, “1995” and “Sabado,” are available for playback on the e-mag version of Esquire’s September issue. Customers who purchase the September issue on the Esquire Newsstand app (Apple devices only) or the buqo app (Apple and Android devices) can listen to the tracks. The tracks will be removed from the e-magazine after September 30. Customers who buy the e-mag issue after September 30 will no longer be able to listen to the tracks. It’s really an exclusive offer for the month.