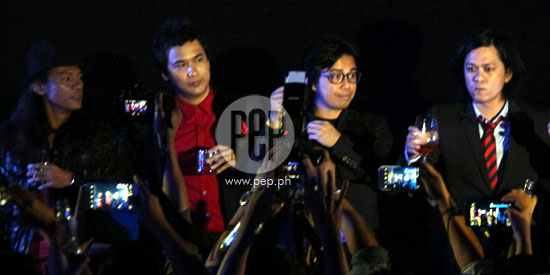 Members of The Eraserheads (L-R) Marcus Adoro, Ely Buendia, Buddy Zabala and Raimund Marasigan collaborated once again for the new songs "1995" and "Sabado." The CD is only available as an insert of Esquire Magazine's travel issue this September.

Despite patching up their differences—enough to convince all four members to reunite in 2008 and 2009, followed by a series of shows abroad—the thought of releasing new materials was considered a longshot even for diehard fans.

For those who grew up idolizing the iconic ‘90s band, the sight of Ely Buendia, Marcus Adoro, Buddy Zabala and Raimund Marasigan sharing one stage again and dishing out their classic songs are enough to stir welcome nostalgia. Expecting for more is simply asking for too much.

When Esquire Philippines announced that the Eraserheads would grace its September travel issue, the news spread like wildfire on the Internet. Total madness ensued when it was revealed that included in the magazine is a CD containing two new materials recorded by the band.

Suddenly, it was Eraserheads-mania all over again.

The title “1995” easily conjures nostalgia. One can’t help but wonder if Buendia is deliberately referring to the band’s glory days. The year 1995 was a highpoint in the band’s career. Coming from the strength of Ultraelectomagneticpop! (1993) and Circus (1994), the band released their biggest selling album, Cutterpillow, in 1995, which further solidified the band’s reputation as a hit-making machine.

The song “1995” opens with Buendia’s distinct voice set in the band’s trademark melodic style. While the lyrics are straightforward at best, it has Buendia’s undeniable stamp of conjuring simple words weaved vaguely.

The song is subject to various interpretations, and Eheads fans have already started doing that online, dissecting the lyrics and coming up with various theories on the song’s message.

“1995” sounds very Eraserheads-esque, and it picked up from where the band left off in their last studio album, Carbon Stereoxide (2001). The only difference is that “1995” has more spring to it, as compared to the darker sound prevalent in the Carbon Stereoxide materials.

“Sabado,” on the other hand, mirrors the group’s early years in terms of feel and appeal. The song’s simplicity and sing-along potential certainly suits the quartet’s reputation for crafting songs that are catchy, frank and relatable.

Part of the Eraserheads’ charm was the band’s ability to write songs that capture life stages. From young love (“Ligaya” and “Sembreak”) to the sting of heartbreak (“Pare Ko”) to saluting friendships (“Minsan”) and dealing with adult issues (“Maskara”).

Most employees, of course, could relate to that feeling of being stuck in a routine and longing for the weekend to catch a breather.

The Eraserheads are at their best when tackling seemingly mundane subjects, dishing out the words as if they’re talking to their listeners in a casual manner. “Sabado” proves that the Eraserheads never lost that ability to stir general emotions that is enough to reach out to a wider audience.