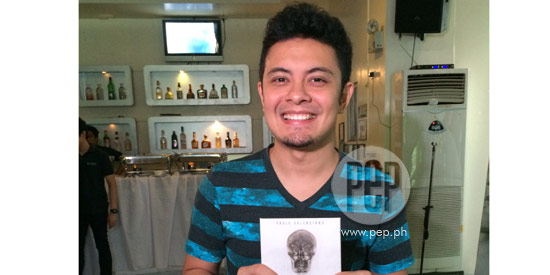 Paolo Valenciano faces one of his greatest fears by daring himself to do a solo album.

The eldest son of Mr. Pure Energy Gary Valenciano said he has always been afraid to do a project alone.

However, he didn't let this fear take over when Star Records offered him to do his first solo album titled Silence/Noise.

The Salamin band member and concert director realized he shouldn't pass up an opportunity like this.

“I'm not getting any younger,” Paolo told PEP.ph (Philippine Entertainment Portal) and other entertainment writers during the press launch of his album last September 30.

The Salamin band member said Silence/Noise is also a step forward for him.

He explained this by taking note of the cover of his album, which shows his headshot on one side and an X-ray of his skull on the other side.

“I'm afraid of this whole thing pero I'm taking the leap of faith na lang and just do it.”

Then, he related, “When I was talking to Star Records, iniisip ko rin na when I turn 40 years old or 45 years old, when I look back at this time, and I had an opportunity to do an album and I rejected it because takot ako, that's not something that I can live with.

“Magre-regret lang ako no'n for the rest of my life, I think.”

It also contains the acoustic versions of “Muling Magbabalik” and “Parusa” as bonus tracks.

Silence/Noise is now available in record bars nationwide for P250. The tracks can also be downloaded via iTunes, Amazon.com, Mymusicstore.com.ph, and Starmusic.ph.