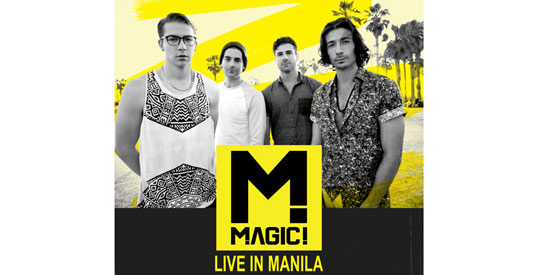 MAGIC!, the band behind “Rude” and “Don’t Kill The Magic,” will perform on October 22 at Resorts World Manila. Tickets to MAGIC! Live in Manila are now on sale via

MAGIC!, one of today’s hottest bands that brought us the smash hits “Rude” and “Don’t Kill The Magic,” will be holding its Manila concert on October 22. They will perform at the Newport Performing Arts Theater in Resorts World Manila for their first-ever concert tour.

Reggae fusion band MAGIC! hails from Toronto but they certainly aren’t your ordinary Canadian quartet. With their Carribean sound infused with funky melodies, MAGIC! is set to revolutionize the reggae paradigm. Armed with the synergy of a groovy rhythm, hypnotic refrains, and guitars with psychedelic Jamaican vibes, their debut single “Rude” climbed up to the No. 1 spot of the Billboard Hot 100 chart in the U.S. and British Singles Chart. It has also gone triple platinum, spawning over 3 million copies.

MAGIC! lead vocalist, record producer, composer, and Grammy Award winner, Nasri, has written songs for massive artists such as Justin Bieber, Akon, Boyzone, and Christina Aguilera, among many others. Nasri is joined by equally brilliant Mark Pelli on guitar, Ben Spivak on bass, and Alex Tanas on drums. Nasri affirms that he had always wanted to do a project that had a fusion of “reggae, rock, pop, and a little soul.” He found precisely what he was looking for in 2012 during a writing session when he heard guitarist Mark Pelli strum a reggae-tinged riff. “Everything simply worked like MAGIC!” Nasri exclaims, also asserting that this reaction to their stupendous jamming experience is where they derived their band’s name.

Bassist Ben Spivak and drummer Alex Tanas joined in soon after thatfirst jam, and the quartet ventured on to commence the recording of their full-length 2013 debut. No boundaries were set, and no rules were implemented—an indication of how the band is tremendously versatile and dauntless in touching various styles in music.

Nasri described the initial single “Rude” to be “fun, soulful, easy” and is effortlessly recognizable. He adds that this is what they want their songs to do.

Furthermore, track “No Evil” builds up into an anthemic chant, while “Let Your Hair Down” has the power to make hips sway to its infectious rhythm. “I think that one will be a favorite for a lot of the ladies—or at least I hope,” laughs Nasri. “It’s about letting loose and having a great time.”

He concludes by saying, “I want everybody to join us on this MAGIC! adventure. It’s a stressful time out there, and people are struggling to find hope in balance. This music is meant to put you in a good mood. We want to bring people together to have a good time. It’s not about us. It’s about the music. We want you to be a part of that energy and a positive musical world.”

MAGIC! was featured on the track “Cut Me Deep” by the multi-faceted singer-songwriter and dancer, Shakira. In 2015, the band will tour with one of today’s hottest rock groups, Maroon 5. World-renowned DJ/producer Zedd premiered his remix of MAGIC!’s “Rude” in his Lollapalooza set last September 2014, also pertaining to the remix as his birthday gift to himself.