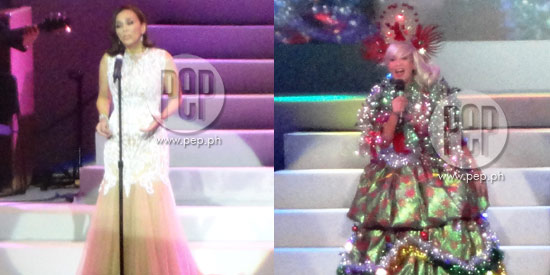 Kuh Ledesma (left) and Fe de los Reyes (right) reunited with other Music & Magic members for their concert at the PICC. Zsa Zsa Padilla, Gary Valenciano and Donita Rose were among those who watched the concert Trending Music & Magic The Reunion.

Last October 3, memories of Music & Magic (M&M) were relived when original members of this iconic band reunited in a one-night-only concert held at the PICC Plenary Hall.

This band changed the landscape of Manila’s lounge entertainment when they became known as performers at the Alibi Bar of the Regent of Manila and Tavern on the Square in Greenbelt Makati. They even conquered the Peppermint Park and Atlantis in Singapore and the Pyramid Club in Kuala Lumpur Malaysia.

This 1980s group had its beginnings in 1979 when Jet Montelibano, Toto Gentica, Kuh Ledesma and Nonoy Mendoza got together to form this exciting show band. Butch Elizalde (lead guitar) and Hector Pedero (bass) were also introduced by Nonoy to the group and Fe de los Reyes and Eva Caparas (from Ateneo University) and Angeli Pangilinan (from UP Diliman) joined in when auditions were held for three new female back-up vocalists.

When they disbanded in 1986, members of M&M became musical directors, song writers, artist managers and a comedian.

Thus this reunion concert titled Trending Music & Magic The Reunion, a joint production of Viva Live and Artist House, was an event to look forward to because it brought them back onstage once again to relive the excitement of yesteryears.

The concert venue was almost packed to the rafters and many of the crème de la crème in the music and entertainment industry were present, including Zsa Zsa Padilla, Gary Valenciano, Lou Bonnevie (wife of Toto Gentica) and Donita Rose plus Anthony Pangilinan and Senator Francis “Kiko” Pangilinan, both brothers of Angeli, all looking forward to an evening of beautiful music and a lot of fun.

The band did not disappoint as they performed live, for their loyal fans, their repertoire of dance hits, party anthems, and power ballads of the 1960s, 1970s and early 1980s.

The ladies performed “If My Friends Could See Me Now” (a Sweet Charity hit), “Sugar Pie Honey Bunch” (a Four Tops hit), "Heaven Must Have Sent You" (a Supremes hit), “How Deep is Your Love” (a Beegees hit), “Material Girl” (a Madonna hit), “It’s Raining Men” (A Geri Halliwell hit), “Fire” (a Pointer Sisters hit), “Diamonds” (a Rihanna hit) and “Diamonds are a Girl's Best Friend” (a Marilyn Monroe hit).

Meanwhile, Eva gave her rendition of “Lucy in the Sky With Diamonds (a Beatles hit), Angeli the “One Note Samba” (an Antonio Carlos Jobim hit) and Vicky “Together Again” (a Janet Jackson hit).

Jet performed, with the ladies, “Everybody Needs Somebody To Love,” “Only You,” “Welcome in Cabaret,” “The Great Pretender” (a Platters hit), “I’ll Be There” (a Jackson 5 hit), “Ain’t No Mountain High Enough” (a Diana Ross hit) and a Beatle medley (“Here Comes the Sun” and “I'll Get By With A Little Help From My Friends”) plus “Money Makes The World Go Round” with Kuh.

A touching and poignant segment during the concert was when the group performed, with their spouses and their children joining in, the songs “Sing” (a Carpenters hit) and “Make Your Own Kind of Music” (The Mamas and the Papas hit).

Kuh, Jet, Angeli, Eva, Vicky and Fe closed the concert, with the crowd on their feet and dancing, with a medley of dance anthems – “Sweet Inspiration” (a Vonda Shepard hit),“Souvenirs” (a Voyage hit), “I Love the Night Life” (an Alicia Bridges hit), “Bad Girls” (a Donna Summer hit), “Never Can Say Goodbye” (a Jackson 5 hit), “No More Tears (Enough is Enough)” (a duet by Barbra Streisand and Donna Summer) and “We Are Family” (a Sister Sledge hit).

Truly, the chemistry, passion and positive energy was still there and everything just came naturally for the group with the lyrics, the melodies and the “voicing” just rushing out of their lips and their hearts as if it was only yesterday.


The nearly three-hour concert was punctuated by flashy and almost theatrical choreography (thank God they can still move despite their age), comedy skits (especially the “Abakada ng Pasko” and squeaky version of “Let It Go” by Fe, a natural comedian) and nice costumes (the icing on the cake), a huge component of their performances, which spiced up the entire experience.

Broadway musicals were also an inspiration for some of their acts with Kuh rendering the song “Don’t Cry For Me Argentina” (from Evita) and the whole group singing “One Night Only” (from Dreamgirls). There was always something different happening in each number. Let’s hope this reunion concert isn’t their last. 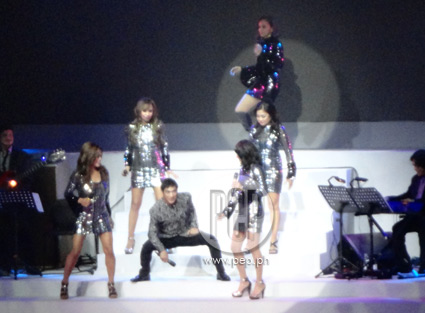