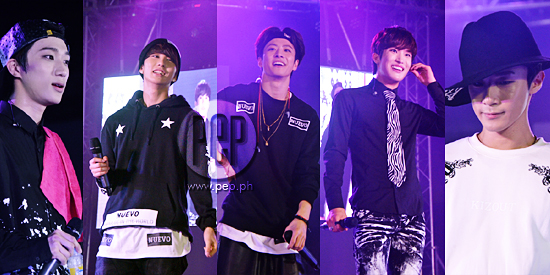 (From lefT) BIGSTAR's Raehwan, Jude, Feeldog, Sunghak, and Baram visited the Philippines to perform in KNATION 2014.

South Korean boy group BIGSTAR became closer to their Filipino fans during their performance in KNATION 2014 at the SMX Convention Center last October 5.

Baram then said in English, “I love you, thank you so much,” while Jude told everyone: “Hi guys, nice to meet you!”

The boys opened the night with their song “HOTBOY,” afterwards, BIGSTAR confidently displayed their “individual charms” for their Manila audience.

Feeldog and Baram showcased their rapping skills. Jude and Raehwan sang Justin Bieber’s “Die in Your Arms” and “Baby,” respectively. The audience then felt awe-struck with Sunghak’s rendition of Freddie Aguilar’s “Anak.”

When asked how he learned about the Tagalog song, the heartthrob answered, “My father made me listen to it when I was young.”

The host commented, “His father knew that he will be famous in the Philippines,” making Sunghak look a bit flustered.

The boys also showed off their “connection” with Pinoys, they not only amazed fans with their Tagalog skills, but also won hearts as they demonstrated their love for the Philippines.

Twenty-three-year-old performer Raehwan cited the country as his “second province.” He explained, “I have studied here, [in the] Philippines, with you guys, for English.”

Afterwards, 21-year-old member Sunghak declared his love for mangoes, “I’m very happy to have met all of you, and I really really love mangoes. I’m really happy that I can be able to eat a lot of mangoes.”

The members then noted that “in the Philippines, it’s not mangoes, it’s called mangga.”

The boys then cheered “Mangga! Mangga!” together with the fans. The playful idols would also incorporate the word “mangga” during their performances, making the audience laugh heartily.

BIGSTAR also performed their songs “Think,” “Be Brave,” and “Run&Run,” while asking their fans dubbed as “ONLY ONE” to sing along with them.

HAPPY BIRTHDAY BARAM. Baram, who will celebrate his 24th birthday on October 8, was surprised to see their Filipino fans prepare something special for him. The fan club gave him a delicious-looking chocolate cake!

The boys, who still couldn’t get over “mangga,” joked “Happy Birthday to you, mangga!” They then sang Baram a birthday song, while still including “mangga” in the lyrics.

The birthday boy then thanked his Filipino supporters before ending their show, “I’m happy to come here in the Philippines and thank you for the warm welcome, Korean fans also came here today.

“Thank you for cheering us on and we hope to come here again.”

Feeldog left with a promise, “It’s so sad but we promise to come again. Thank you very much, mangga!”