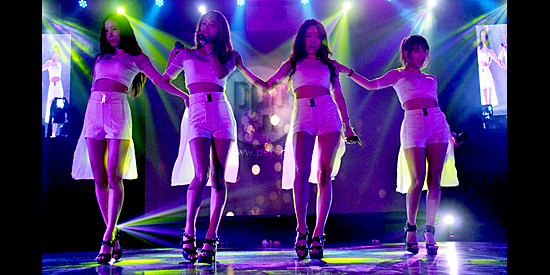 Wearing matching all-white body-fitting outfits, the girls showed off their curves when they also performed “Move” from their debut album, as well as Jennifer Lopez’s “On the Floor.”

“Move” became a hot topic among netizens when it was first released. Both Korean and international fans have mixed reactions towards the music video which depicts lesbian love.

The liberated lyrics from the song then translated to the raunchy dance moves that fans were able to see live.

Being the only female idol to perform at the 2014 KNATION Music Showcase, the members of 4L were able to captivate male and female audiences with their sexy charms.

Aside from showing their sultry side on stage, 4L also revealed their cute side during a short talk with the host. They introduced themselves with enough “aegyo” [cuteness] and innocence, you wouldn’t believe that they were the same people who also danced sexily on stage.

The host complimented the four ladies’ good looks by saying “아름다워 [ areumdawo,]” which literally means “beautiful” in English. 4L shyly bowed down and thanked him.

The girls then enthusiastically asked the audience, “Are you happy?”

A loud “Yes!” could be heard inside the SMX Convention Center.

“I am so happy!” the members then cheerfully replied.

4L also gave out signed Move albums while singing. Fans eagerly snatched up the copies given out by the K-pop performers.

In response to the warm welcome, the
Korean singers expressed their gratitude for their Filipino fans, “Thank you for inviting us for this performance.

“We didn’t expect that there will lots of people who will be going to the fan signing so we were really excited when we saw the fans.

“We hope to come again for another fan signing.”

The group then ended their performance with their own version of Korean boy group Big Bang's “Sunset Glow.”

ISA PANG CHICKENJOY. Meanwhile, the girls reportedly tried out Filipino fast food chain Jollibee’s famous Chickenjoy. They were also able to spend time with their fans through a short but intimate dinner date.