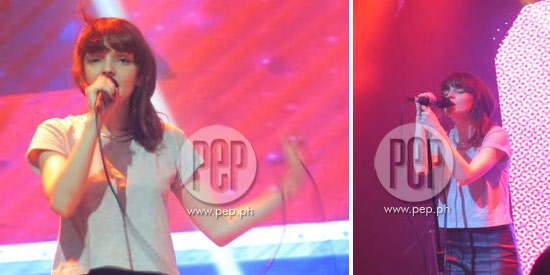 Chvrches, led by vocalist Lauren Mayberry, performed for their Filipino fans at the Samsung Hall in SM Aura.

Scottish electronic/synthpop band Chvrches debuted in Manila last November at the Samsung Hall in SM Aura. Hundreds of followers trooped to the venue and reveled in the music of the trio from Glasgow.

The band landed in Manila as a part of their Asian tour, after performing in Bangkok, Kuala Lumpur, and doing two shows on separate venues in Singapore.

Having been part of other bands, the group started in 2011 when Iain and Martin asked Lauren to try singing some of their demos. The band released their first album, The Bones of What You Believe, in September 2013.

Chvrches used the Roman “v” on their name so as not to be confused with actual churches when searching them on the Internet. The band affirms that they owe a great deal of their success to the online community.

Having personal interaction with their fans via the Internet also has its drawbacks. Last year, Lauren wrote for The Guardian, speaking up against online misogyny which she has a subject on their social media accounts.

Chvrches ranked fifth on BBC’s Sound of 2013 list of the most promising new music talent.

Most recently, the band wrote the soundtrack, “Dead Air,” for the The Hunger Games: Mockingjay film.

THE SHOW. Local bands Brisom and Autotelic were the front acts that warmed up the crowd before the performance by Chvrches.

The show started at past 10 pm and opened with the upbeat songs, “We Sink,” and “Lies,” to the delight of the crowd.

The band’s loyal followers knew every word and sigh of the band’s catchy and “lyrically twisted” songs. They sang along to “Lungs” and the single, “Gun,” echoing the lyrics: “I’ll be a gun and it’s you I’ll come for!”

“I’m the night sky, I’m the fire in your eyes / and I want you now and for all times / I’m the cold heart, I’m secret that you hide / I’ll be listening until you decide,” went the song “Night Sky,” followed by “Science/Visions.”

Chvrches next performed “Recover,” which was on the first EP they released in March 2013. They then took on a more somber tone with “Tether.”

The crowd fist-pumped as one when Chvrches performed the first ever single they released in 2012, and probably their most popular song, “The Mother We Share.”

After exiting the stage, the group reappeared for the encore and capped the night off with “You Caught Light,” “Dead Air,” and “By The Throat.”