Boyce Avenue to hold Valentine's Day concert in Manila in 2015 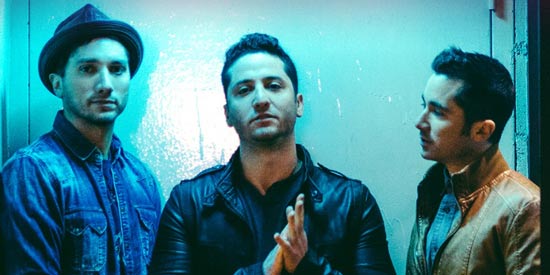 Boyce Avenue will hold its Valentine’s Day concert on February 14, 2015 at the Smart Araneta Coliseum.

Boyce Avenue, one of today’s hottest singing sensations known for its strong acoustic roots and melodic rock sound, is returning to perform at a special Valentine’s Day concert on February 14, 2015 at the Smart Araneta Coliseum in Cubao, Quezon City.

Billed as Boyce Avenue Live in Manila 2015, this event from Ovation Productions will bring back the American band more than a year after its last local performance in response to the popular demand of Pinoy fans. The overwhelming support of Filipino Boycers made the band the no. 1 most streamed international artist on Spotify in the Philippines.

The one-night-only show will mark Boyce Avenue’s fourth local appearance in six years following its sold-out concert at Resorts World Manila last December 30, 2013, also produced by Ovation Productions, and its headlining tour with American Idol winner Kris Allen and the dance troupe Jabbawockeez on February 5-6, 2010, one year after its local debut on February 16, 2009.

As its first-ever arena show in the Philippines, the Big Dome gig is expected to attract a huge attendance from a cross-section of music lovers who have passionately followed, along with millions in other parts of the globe, Boyce Avenue and their music online through their YouTube channel.

The group, named after a combination of two streets where the brothers grew up, took its most formative steps toward becoming a band by continuing to write original music and performing local shows.

In 2007, Boyce Avenue showcased their emotive, radio-friendly alt rock on YouTube with a series of videos of them performing acoustic versions of their songs as well as covers of their favorite songs by other artists, such as Justin Timberlake’s “Love Stoned,” Rihanna’s “Umbrella” and Coldplay’s “Viva La Vida” among many others.

The result was fantastic.

The videos instantly shot to sky-high popularity on YouTube and, to-date, Boyce Avenue has over 1,000,000,000 viewers on YouTube and over 5,500,500 subscribers– making it one of the top artists of all time on YouTube. It has likewise gained 500,000 Twitter followers and 2,500,000 Facebook subscribers that account for a strong and solid digital fan base.

Other unforgettable Boyce Avenue covers include “Use Somebody” (featuring Hannah Trigwell) by Kings of Leon, Rihanna’s “We Found Love”, “Demons” by Imagine Dragons, David Guetta ft. Usher’s “Without You”, and Katy Perry’s “Roar” (featuring Bea Miller).

While producing the videos for YouTube, Boyce Avenue remained committed to create original material for its debut album, completing the recording of its last three songs in October2007 – “Dare To Believe,” “On My Way” and “Hear Me Now” (piano acoustic).

The album, titled All You Meant To Be, was released on March 25, 2008 and was well received in the market and got positive reviews in industry publications, while its songs were featured in various MTV programs.

In their desire to connect with their online fan base, Boyce Avenue shifted their focus on touring, starting in early 2009 when the group performed for an estimated 25,000 over four headline shows in the Philippines, followed by a series of headline tours in the United States, Canada and Europe.

They returned to the Philippines in 2010 to play festivals with Kris Allen and The Jabbawockeez during the Music Fest 2010 concert at the McKinley Hills concert grounds in Fort Bonifacio, Taguig City.

As of May 2012, the band has headlined, since its initial 2009 headline tour, 6 tours in Great Britain and Ireland, 6 tours in continental Europe, 4 tours in the United States, 3 tours in Canada, 1 tour in Australia and has played several shows in Southeast Asia, including the Philippines.

Over the past three years, Boyce Avenue has played for over 350,000 people in 20 countries and 5 continents, including the United States, Canada, Australia, Asia, Brazil, Europe and the United Kingdom.

On June 15, 2010, the trio released All We Have Left under Universal Republic which contains reworked songs from All You Meant To Be as well as new songs, such as “Every Breath,” “On My Way” and “Broken Angel.”

On August 9, 2011, the band left Universal Republic and began producing its CDs through its own label, 3 Peace Records.

Boyce Avenue’s EP (Extended Play), No Limits released on April 24, 2014, contains more upbeat pop tracks than their previous work, including seven original tracks produced by the band, with “I’ll Be The One” co-produced with Milkman and “Scars” with Ryan Ogren.

A special tribute came from Louis Tomlinson of One Direction, a vocal fan of Boyce Avenue, when he arranged for the band to open for One Direction during its debut Up All Night Tour in Great Britain and Ireland in January 2012.

In 2014, Boyce Avenue was nominated for the Teen Choice Award for Choice Web Star: Music.

Catch Boyce Avenue LIVE in Manila at The Big Dome on February 14, 2015 and make Valentine’s Day a memorable experience!