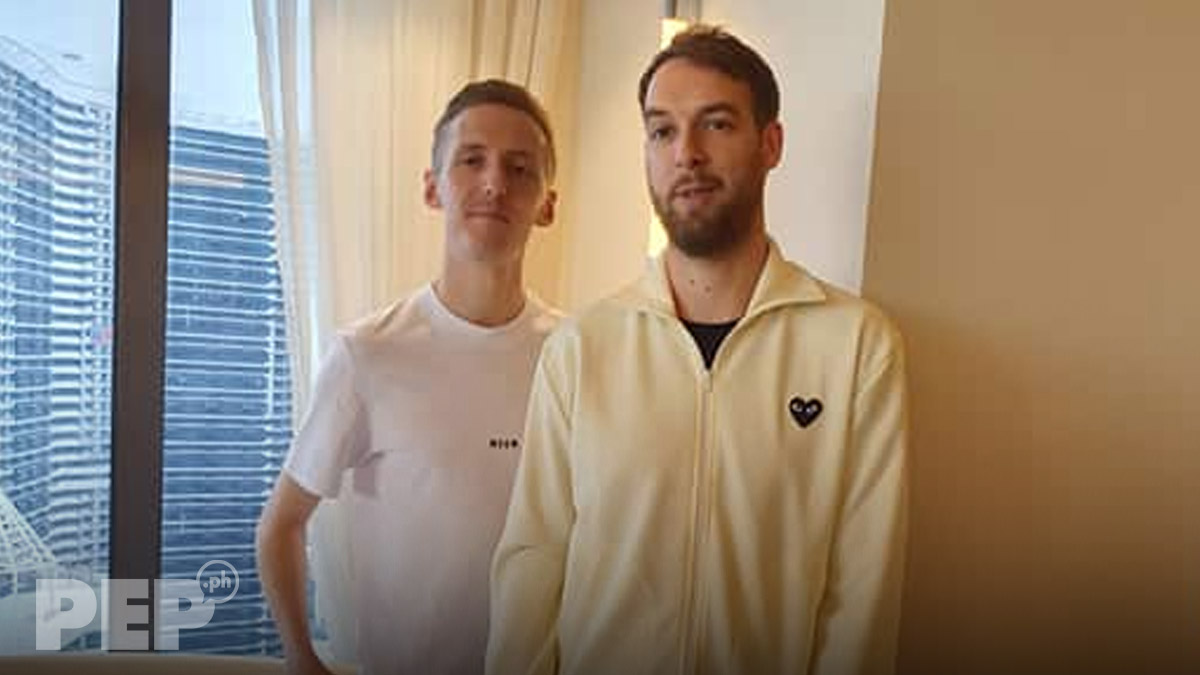 English electronic music duo Honne composed of James Hatcher and Andy Clutterbuck made their way back to the Philippines for the fourth time from November 7 to 13, 2019.
PHOTO/S: Nikko Tuazon

English electronic music duo Honne—composed of James Hatcher (producer) and Andy Clutterbuck (singer, producer)—visited the Philippines for the fourth time to perform for a series of shows at Ayala Malls.

James and Andy performed from November 7 to 13 in various venues to play songs from their albums Love me/Love Me Not and Warm on a Cold Night.

PEP.ph (Philippine Entertainment Portal) and other members of the press got to know more about the band during the November 12 roundtable interview hosted by Warner Music Philippines at Seda Hotel in Makati City.

This is the band's second visit this year following their appearance at Wanderland Music and Arts Festival 2019 last March.

Andy revealed that he had the best experience performing for their Filipino fans this time around.

James agreed, "That's the best bit! I love it!"

Members of the press asked about their Filipino experience and whether they were able to try local cuisine.

Andy answered, "I love sisig! What else? Cloud Nine..."

James added, "Adobo is quite nice."

The two have yet to try balut or fertilized duck egg. James is not fond of the idea of trying the local delicacy.

He explained, "We were talking about this... It's obviously really, really normal here but just 'cause we've never had in England, it's hard to get your head around."

PEP.ph asked whether they were able to go around the metro during their visit but James said their schedule is quite hectic.

They were able to explore some tourist spots in Manila during their visit last March.

Andy recalled, "The last time we were here, we went to the old town [Intramuros].

"It was where Jose Rizal was kept."

He continued, "It had a little garden in the middle and that was very lovely."

THE HISTORY OF HONNE

James and Andy formed Honne in 2014. The two musicians, however, have known each other for over a decade.

James recounted, "We met a long time ago, ten years now, on the first day of university in a dinner queue to get some food."

Since they have been friends for over ten years, what interesting anecdotes can James and Andy share about each other?

James revealed that Andy grew up in the countryside.

"An interesting fact about Andy is that he grew up in a farm and he once saved a lamb who he called Chickie and is stuck on a barb wire fence."

Meanwhile, Andy recalled that time when he picked James to be his best man for his wedding.

He narrated, "James was my best man at the wedding when I got married a couple of months ago.

"And he told a very funny story about how me and my now wife first met and had our first kiss, and he reenacted it.

"It was in a club basically and he brought some club music, and everyone in the audience was going [fist pumping]."

James continued, "I was like, 'And then, they kissed!' There was like a table which is basically like three times the length of this all filled with people who were in the club the night they kissed. And they were like, 'Yeah!'"

THE MUSIC OF HONNE

James and Andy also shared the story behind their band's name. Honne is actually a Japanese word that means "true feelings."

James recalled, "The name 'Honne' came after we've written a load of music. So we started writing all this music and we thought we're on something that is quite unique for the first time in our lives.

"Andy was living in Tokyo for a couple of months and we were writing music between Tokyo and London.

"And I stumbled across the word and I felt like it described exactly what we're writing about and still are.

"And we both really loved it. It's quite hard to find words that aren't taken and one word to describe something broad.

"In English, we don't have many words like that and there's not very many in the world, just one word to describe like a bigger picture."

Andy added that the word perfectly embodies their music. Some of their well-known hits exploring different themes about love are "Location Unknown," "Warm On A Cold Night," and "Day 1."

He said, "It's basically it's all about true and honest things that have happened to either myself or James or even like our close friendship group. That's why it made perfect sense to use that name for our band."

At one point, members of the press asked James and Andy to describe what music means to them.

James said, "The most important thing that I get from music and that I want to give to people with our music is like people feeling connected or something, not feeling alone. So I hope people get like warmth from the music and like feeling related to or relating to something."

For his part, Andy answered, "I find it for like escapism, so whenever I listen to something, I just try to take my mind off of things I'm worried about. [Like] being on the flight, that really helps, not that I'm scared of flying. It just helps relax you."

Which artist or band would they want to do a collaboration?

James answered, "Our dream would be Frank Ocean, that would be amazing but that's definitely a dream. Chance The Rapper would be really cool. I feel like that's ever so slightly more attainable than Frank Ocean."

Meanwhile, Andy is open to doing a song with LANY.

He said, "They're huge here so LANY. We know them a little bit. I mean we should try do something with them. I think we might be seeing them this January so we'll see what happens."