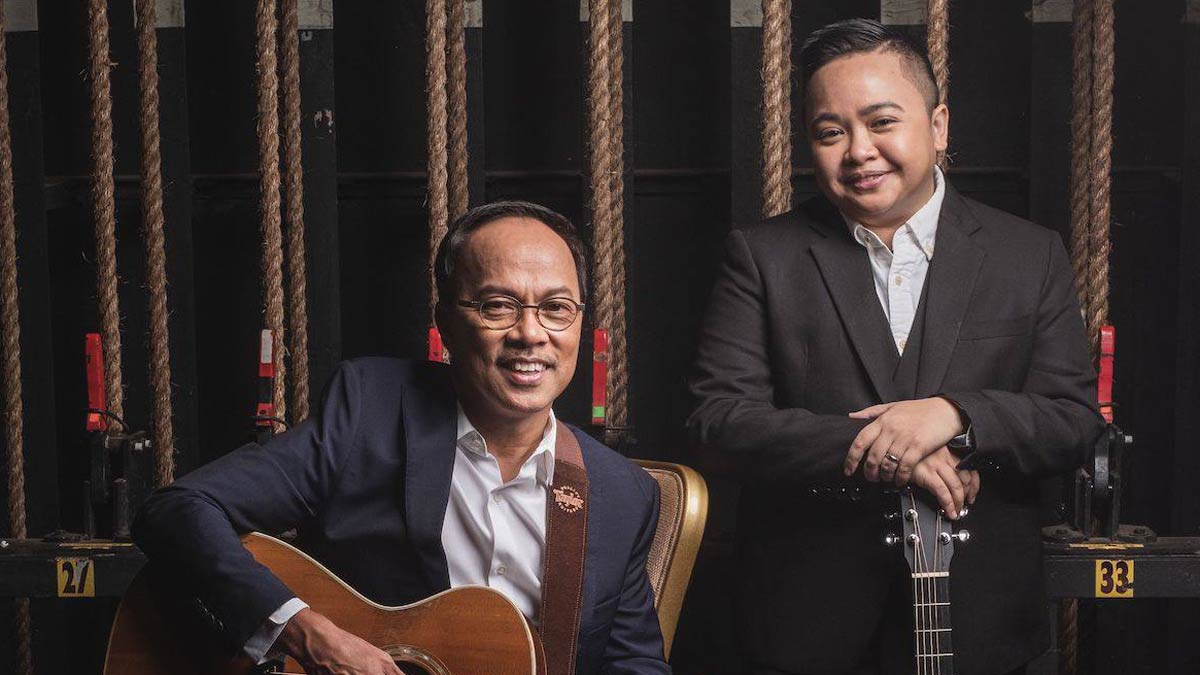 Noel Cabangon (left) and Ice Seguerra will hold their Kwerdas concert on November 23, 2019 at The Tent at Solaire, Parañaque.

Even if they obviously belong to opposite sides of the political fence, Ice Seguerra and Noel Cabangon have no problem performing together on the same stage.

Ice, of course, is a very vocal supporter of President Rodrigo Duterte and served as chairperson of the National Youth Commission for some time.

He is married to Film Development Council of the Philippines chair Liza Diño-Seguerra and in his own personal capacity, continues to help out in FDCP projects.

Noel, on the other hand, has been identified with former President Noynoy Aquino ever since he performed at the former’s inauguration. As the former president of the Filipino Society of Composers, Authors and Publishers, Inc. (FILSCAP), Noel has worked with the former President Aquino in the past and has been known to be critical of President Duterte, as well.

Ice and Noel, however, have over the years, developed a mutual respect for each other’s artistry.

Both are one in saying that their longtime friendship transcends their political and idealogical differences.

“Ang nangingibabaw sa aming dalawa ni Kuya Noel ay yung respeto namin sa isa’t isa bilang musikero at bilang tao [What’s more important for both of us above all is our respect for each other as musicans and as persons],” Ice said during the recent press launch for Kwerdas. This is the first in the series of intimate “Solaire Gigs” concerts starting November 23 at The Tent at Solaire, Parañaque.

As far as he can recall, Noel said neither he nor Ice ever took each other’s personal views on national issues personally. As far as both of them are concerned, it has always been about music.

“Music is something that creates harmony so that’s what we are,” added Noel who also recalled that the coming show is not the first time he and Ice headlined together.

Back in 2013, the two singer-songwriters topbilled a two-day concert called Tambayan Hits at Onstage in Greenbelt Makati.

“We’ve known each other for quite a while and we both like to play the acoustic guitar just like people do when they’re in their tambayan so that’s how we got together.”

The way Ice describes it, he and Noel want Kwerdas to have a similar “spontaneous and unstructured” vibe as Tambayan Hits.

“We wanted this show [Kwerdas] to have a tambayan theme. What do you sing when you joined up with your friends in a tambayan? What’s the first song that comes to your mind when you start strumming your guitar? That kind of thing,” Ice further elaborated.

“When the stage designer showed us the stage and crowd setup, it felt very intimate and suits our performing style. Me and Kuya Noel, we don’t want that we have to perform, so to speak.

"Sitting and just singing the songs is a more comfortable vibe and we’re very happy in the sense that this is how we wanted to do this,” Ice pointed out.

As for the songs they do intend to perform on Kwerdas, Ice and Noel said that in addition to their own original hits (i.e. “Pagdating ng Panahon,” and “Kanlungan”) they have a set list of popular tunes that spans several generations.

“The interpretation is very acoustic but we are collating many different songs from as back as the '60s until the present so it should be interesting how it would all play out,” said Noel.

In addition to watching Ice and Noel perform, lucky audience members will be invited to jam with the performers who will be accompanied by a six-piece band. The rest of the crowd can sing-along to their hearts’ content wherever they are seated in the cozy, intimate venue.