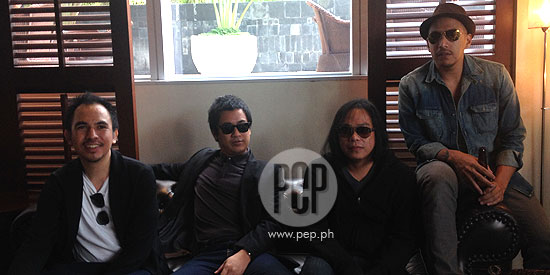 Filipino rock band PUPIL (L-R) Dok Sergio, Ely Buendia, Jerome Velasco and Wendell Garcia will represent the Philippines in the 2014 Skechers Sundown Festival to be held in Singapore this November 22.

Filipino rock band PUPIL will represent the Philippines in the 2014 Skechers Sundown Festival to be held on November 22 at F1 Pit Building, Singapore.

SUNDOWN FESTIVAL. Sundown Festival is an iconic music festival that brings Asian artists and fans onto one singular platform, celebrating and bridging the diverse Asian culture through music and food.

The Sundown Festival will be held at the F1 Pit Building in Singapore on November 22. Other artists joining PUPIL are Regina from China; Kate Tsui from Hong Kong; Kanika Kapoor from India; S.O.S. from Indonesia; WEAVER from Japan; CROSS GENE from Korea; Shila Amzah from Malaysia; Olivia Ong, Jeremy Teng, ShiGGa Shay, and Farrago from Singapore; Chang Chen Yue from Taiwan; and Big Ass from Thailand.

PUPIL is one of the eleven performers that will showcase their music in Singapore. The Pinoy rock band is led by Ely Buendia (Eraserheads), Wendell Garcia (Barbie’s Cradle), Dok Sergio and Jerome Velasco (Teeth) and they are set to rock Singapore with their music.

Ely said that he only learned about the details of their Singapore gig during a pocket press con for media outfits held at Long Bar, Raffles Hotel, Makati City.

He admitted, “Well actually ngayon ko lang nalaman yun nangyaring behind the scenes. But, of course, we were pleasantly surprised.”

Ely said that even if they’re not a well-known band they will give Singapore a show that they will enjoy, “We’re not super well-known...we’re more of a 'cult' band that’s why we try to make it up with a good show.

“Kasi we have a following but in Singapore, for example, okay lang naman we can fill a small bar. So we make it up with a good show.”

How do they plan to wow the foreign crowd?


Wendell quickly answered, “We’re just gonna do our sh*t! We’ll be ourselves.

ZILCH. Apart from this Sundown Festival stint, PUPIL is also working on their newest album Zilch which will be released January of 2015.

The band veers away from the usual drum sound by doing several experimentation by doing DIY techniques in recording Wendell’s part. Ely admitted that they rented a photo studio instead of a recording studio because it’s cheaper. So they had to bring in mattresses in order to turn it into a soundproof room.

It was indeed a collaborative effort. Ely worked on the lyrics of their songs while Dok Sergio was in charge of all the research. Ely said, "For this album, siya ang geek and the catalyst sa mga experimentation."

Dok responded, "Songwriting is still key to good music. I have one song for our album pero na-i-insecure ako sa lyrics ko.

Sergio continued, "Side by side with Ely's lyrics, parang, oh man, mine sucks,"