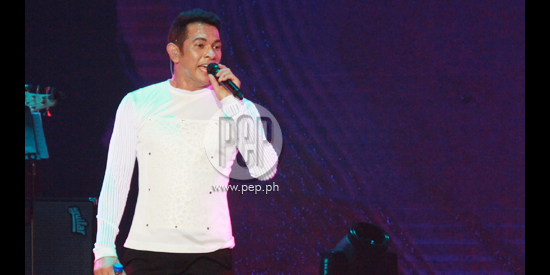 Gary Valenciano creates new song "Bawat Isa Sa Atin" to show support for children's rights. Mr. Pure Energy performed this song during the 25th anniversary of the Convention on the Rights of the Child under UNICEF.

During the 25th anniversary of the Convention on the Rights of the Child (CRC) under UNICEF, longtime Goodwill Ambassador and UNICEF supporter Gary Valenciano performed his new song titled "Bawat Isa Sa Atin."


Mr. Pure Energy performed it for the first time in front of the audience gathered at the SMX Convention Center.

Gary V held this mini-concert in honor of the Filipino children that UNICEF has been supporting through the years and amazingly, it was a song created within days from the event. It is a song he hopes will bless and touch hearts of Pinoys everywhere.

He narrates how the new song came about, "nagkaroon kami ng idea na gumawa ng isang kanta na sana maging bagong theme song natin. Even if you say that you've never had children before, if I say I am no longer a child, if there is anything that binds us to the children is that once upon a time, we were children too."

With much passion, Gary V explains that, "whatever needs we have if they were not met, the next generation doesn't have to be met with the same thing, we can do our part. So my wife, Angeli, nagsulat siya ng mga parang poem, and when I looked at it, there is the idea. Now let's transform it and make it into a song."

Gary explains the songwriting process behind "Bawat Isa Sa Atin" when PEP.ph spoke with him backstage.

"There was a song that I did called 'Kapit Pinoy' and it sounded like that."

"I said, 'Angeli, it sounds too much like that one, but it's beautifully written. Can I change it and make it lyrical?'"

He says that for this song, "instead of telling people, let's all come together, it's really reminding people, hey, listen, you might not know the kid in Cotabato, but you were a kid once. So exactly what that kid has gone through and needed, that's exactly what we are looking for and so I put it together."

Because he knew the CRC anniversary was also coming up, Gary thought, "what if I put the rights of the child in there. We went online for the Tagalog version..."


When the words like magkaroon ng pangalan, magkaroon ng pamilya, magkaroon ng tirahan came up, Gary admitted, "it all just came into place. It was probably the quickest song I have written," the songwriter confessed, as other songs take him two to three months to write.

"But this one, I was inspired, and there was also a deadline, and I always wanted to come up with music for UNICEF. This is just the first project."

We should be expecting more of these songs by the first quarter of next year, Gary V reveals.

Once he finished the song, he recorded it on the Tuesday before this mini-concert held on November 20, 2014. He sang the vocals and UNICEF invited the Mandaluyong Children's Choir to sing it with him.

"They have a certain presence on stage. We've done stuff in ASAP and I did a video with them before. When they project, even their facial expressions are exactly what I need for the song."

Onstage, he told audiences how he had "a great time with them and what we tried to do, we tried to put in everything that is important for the child into this song."

"Whatever problems, the situation, that children are facing today, nothing is impossible when people have the vision to do something about it, when they don't just dream and talk about it, but they make steps in making sure these issues are tackled."


Mr. Pure Energy then asked the crowd: "Why do I say this?"

It was at this juncture that Gary V pulled out a little gadget from under his shirt then asking the kids present how old they think he is. Answers like 31, 43, 41, 45, 47 were thrown out and Gary reacted, "31? I love children talaga!"

He explained how the doctor told his mom, "nung natuklasan ang kalagayan ko, dapat may 30 years of life, or average life span ang binibigay sa isang type 1 diabetes kagaya ko." He revealed to the kids that he had been 14 years old when he was given the 30-year limit. That would make his limit 44, "dapat nung 44 years old, wala na ako sa mundong eto, yan ang nakalagay sa mga medical na libro."

Gary paused before continuing, "last August 6, I turned 50. See, there is no complication in the body that you see here on stage."

"When you plant good seed on good soil, you only produce good fruit."

"Everybody was like, wow... I don't know if it will ever be played on radio. But if there is a video made of this and it comes out... during the week of the children, it's gonna make such an impact.

"It's not just a drive, it's the rights of the children, of every child. Not children from Manila or children from Luzon, it's for every child. I'm really happy that I see all of these people here, you're here, and I really think at this point in time, there's gonna be a lot more impact."

Gary V has been with UNICEF officially since 1997 and he gladly indulged us when PEP.ph asked him if there is any one story that stands out from all the years he has been working with UNICEF.

Before answering, he gave a disclaimer, "I just turned 50, di ba, so maybe when I'm 51 or 52, I'm coming out with a little booklet of 50 outstanding events that have taken place in my life."


This was because when he turned 50 this year, he was going to come out with a collection of 50 amazing stories in his 30-year career but was dissuaded by his sister to hold it off because she said that's just 30 years of your career whereas celebrating 50 years of life is a bigger thing.

But he did graciously share one story with PEP.ph: the story of Jungee from Cagayan de Oro whom Gary met in the aftermath of Typhoon Sendong, early January 2012.

Gary narrates: "Jungee, who was basically 11 at the time, lost his mom, dad, sister. It was a common story. I looked at him and he held my hand. And there were other teenagers also giving their stories but he was the quietest.

"When I reached out and got his hand, he held me tight, just holding it like with fear.

"I looked at him and I said nothing is impossible. I cannot ask him kamusta ka na. All I did was just give him words that would encourage him like andito yung mga kaibigan mo, walang imposible."

Gary recalls that January 28, he got a message asking him if he remembered Jungee and he shares that the message said, Gary, "they found the family. Different parts, alive. They were all alive. I tweeted about it. Do you guys wanna know about a miracle. Twenty-eight days later! What a reunion!"

Gary is still excited about as he tells us of that experience and that this is just "one outstanding story but there are more, you'll find out," when he says he'll release the book featuring outstanding stories of people he has met throughout his 50 years, with many of his UNICEF experiences included as well.

He concludes, "those experiences kasi are really life changing, kasi for some, because you only see these things in the movies, until you meet them face to face and when you go home, their story continues, yours is done after you've been with them."