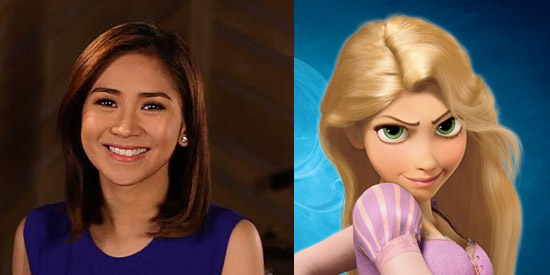 Sarah Geronimo was handpicked to render the English language version of “The Glow.” The Disney Channel also commissioned other singers to perform the song in Thai, Bahasa Malaysia and Bahasa Indonesia. "The Glow" was originally used during the induction of Tangled's Rapunzel (right frame) into the Disney Princess royal court.

Sarah Geronimo still feels “overwhelmed” with joy on her recent achievement: her very first Disney recording of “The Glow.”

The Filipina singer was the chosen by the Disney Channel to sing the English language version of its Princess franchise theme song.

Aside from Sarah, singers from Malaysia, Thailand and Indonesia will give their own rendition of “The Glow” in their own languages.

The Voice of the Philippines coach was handpicked to record her own version of the song originally performed by British singer Shannon Saunders. “The Glow” was originally created in 2011 in time for the addition of Rapunzel (from the 2010 animated film Tangled) as the 10th Disney Princess character.

The music video of “The Glow” debuted on the Disney Channel last December 6.

How was the ABS-CBN singer-actress tapped for this project?

Did you ever dream of singing a Disney theme song?

“Tapos nung na-discover ko na sa sarili ko na I want to be a singer, a professional singer, I also dreamed of becoming part of this kind of project – na singing a theme song for Disney.”

What else does the young diva want to achieve?

What is the main message of “The Glow”?

“The song has a powerful message – a message about pursuing your dreams: that you can be a princess without the gown, without the castle, of course yung Prince Charming…Nag evolve na, nag-mature na yung Disney princess.”

She emphasized that the Disney princess has “evolved and found her own voice.”

When asked if she sees herself as having those qualities that she enumerated, Sarah said with a giggle, "I would like to believe so, na, oo, yung mga qualities na 'yon, parang I possess! Siyempre, positive tayo!"

Does she also believe that women do not need a “knight in shining armor” to save them?

Sarah then gave a message to Popsters, her loyal supporters.


(To watch Sarah's music video of "The Glow," CLICK HERE)