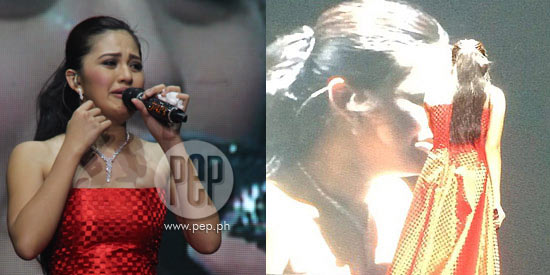 In his Twitter account, Phytos Ramirez posted a photo of Julie Anne San Jose (right frame) crying during her Hologram concert. The GMA-7 actor provided this caption: “I dont wanna see you cry.”

Fans were repeatedly chanting “Iiyak na `yan!” after Julie Anne came out and gave a lively song, dance and rap performance of Nicki Minaj’s “Super Bass” at the start of her Hologram concert.

But her tears did flow and uncontrollably so after singing “Sana Ngayong Pasko” minutes before her concert ended.

Julie Anne cried when she saw the large video screen behind her showed images of herself as a young child with her parents as well as videos of her singing in the talent search Pop Star Kids.

She paused and turned her back from the audience to hide her crying. Fellow GMA-7 star, Phytos Ramirez, who was seated at the front row went up on stage to wipe away her tears.

He immediately went down from the stage when Julie Anne managed to regain her composure. The 20-year-old singer said in tomboyish jest, “[Salamat] p’re.”

In his Twitter account, Phytos posted a photo of Julie Anne crying and provided this caption: “I dont wanna see you cry.”

At this point, the large video screen behind her also showed her fans crying along with her.

Julie Anne recently received a Diamond Record Award for her self-titled debut album. The only other female recipients of the Diamond Record award are Nina for her Live album and Sharon Cuneta for her album Isn't It Romantic. 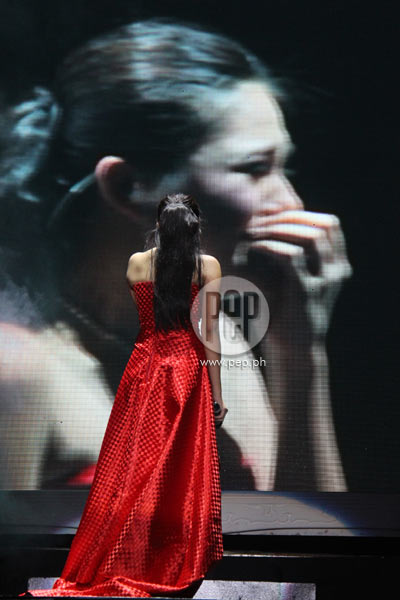