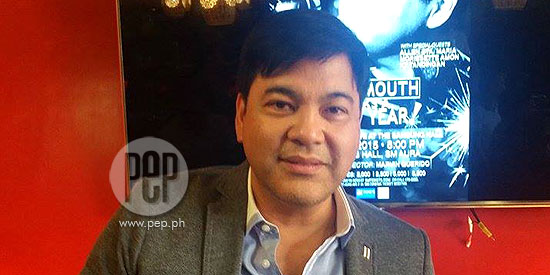 Why Martin Nievera prefers live shows that are not so scripted: "Moments like that are why I love what I do because it’s spontaneous, on the edge of your seat, not sure kung swak ba ‘to or magka-crush and burn ba yung idea na ‘to? That is what makes my job so exciting. There’s never a boring moment."

One of things that made Martin Nievera the country’s Concert King is that he thrives on impromptu performances and manages to turn concert blunders into highlights.

At the Filipino-American Visionary Awards in 2008, Martin had to perform a song number after receiving the Entertainer of The Year Award from Brian Mcknight.

To his shock, however, Martin encountered a technical glitch just when he started singing his piece.

“All of the Asian actors were there. Brian Mcknight gives his spiel, I came out.

“[I started singing] ‘This is the moment…’ Lip sync ang lumabas! Minus one dapat,” Martin recalled.

After two failed attempts at playing his song, Martin quickly asked the technical team to stop the music and he belted out an a capella rendition of "This Is The Moment" instead.

“Everyone thinks it’s part of the script when I make a mistake but it’s not.

“I was so new at the game, so insecure na hindi ko alam kung kaya ko ba itong script na ito, that I ended up not following it.”

“That’s when I learned to feel my audience.”

Martin further shared that he enjoys the thrill of connecting with his audience in a more personal level.

Like in his recent show in Florida, U.S., Martin ended up writing a song for singer-songwriter Dennis Lambert, who was amongst the audience at the time.

“Right there and then I said, ‘You know what, has anyone written you a song?’ And he was with his wife.

“Right there, on the spot, I wrote him a song by asking questions.

“So moments like that are why I love what I do because it’s spontaneous, on the edge of your seat, not sure kung swak ba ‘to or magka-crash and burn ba yung idea na ‘to?

“That is what makes my job so exciting. There’s never a boring moment,” Martin gushed.

Martin hopes to do more of those impromptu moments with his upcoming show, Martin Nievera Live at the Samsung Hall: The Big Mouth Rocks a New Year!

To be held on January 3 at SM Aura’s Samsung Hall, Martin shared that he’ll be performing the classic love songs from his latest album titled Big Mouth, Big Band.

Those who love music from the '80s and '90s will surely enjoy Martin’s rendition of Queen’s “Love of My Life,” Toto’s “I Won’t Hold You Back,” Earth, Wind, and Fire’s “Every Now and Then,” and Simply Red’s “Stars” among others.

“If there's anything in common with the Filipino audience, they all demand perfection.

“It’s because of that fear that I became so human on stage. I can make mistakes.

Martin’s schedule is actually packed with other concert shows in the States, but he doesn’t mind working this holiday season.

“This is one time in the year [the phone doesn’t stop ringing], thank God!”