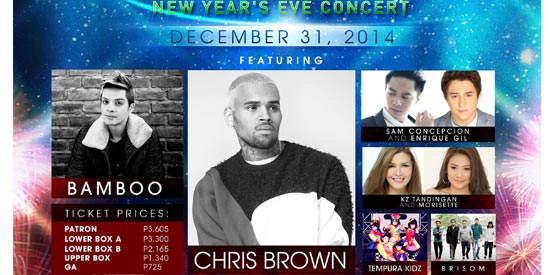 Chris Brown headlines the 2015 Philippine Countdown New Year's Eve Concert to be held at the Philippine Arena. Bamboo, Rico Blanco, and Spongecola will also perform at the largest indoor stadium in Bocaue, Bulacan.

Here’s to celebrating with family and friends and looking forward to a prosperous new year! But before you officially say goodbye to the year that was, welcome 2015 in not just one night but two consecutive days.

Headlining the 2015 Philippine Countdown is no other than R&B superstar and Grammy Award-winning artist Chris Brown.

But before the much-awaited New Year countdown, carnival attractions, circus performers and exciting performances await those who will troop to the Philippine Arena. Boasting of a maximum capacity of 55,000 people, it broke the Guinness World Record for being the largest mixed-use indoor theater.


Don’t miss out on these musical acts and make sure to plan the two-day New Year musical extravaganza prepared by Maligaya Development Corporation at the biggest arena.

Rico Blanco, Parokya ni Edgar, Kjwan, Spongecola, Callalily, Silent Sanctuary, Up Dharma Down, Autotelic, Imago and other local bands will be fueling the festivities. Kitchie Nadal and Barbie Almalbis will also be there to get you pumped up before the clock strikes 12.

Additional entertainment for the whole family includes a parade, bazaars as well as carnival rides and attractions.

Tickets for the carnival and New Year’s Eve concert are sold separately but for those who have already purchased the Chris Brown ticket, you can automatically enjoy the other activities as well.

Tickets for the carnival and local bands’ performance are at P500 for two-day access while tickets to the New Year’s Eve Concert featuring Chris Brown are as follows: Patron P3605, Lower Box A P3300, Lower Box B P2165, Upper Box P1340 and General Admission is at P725. Events start at 2PM for both days.