The story behind Christian Bautista's song with Indonesian Idol Delon 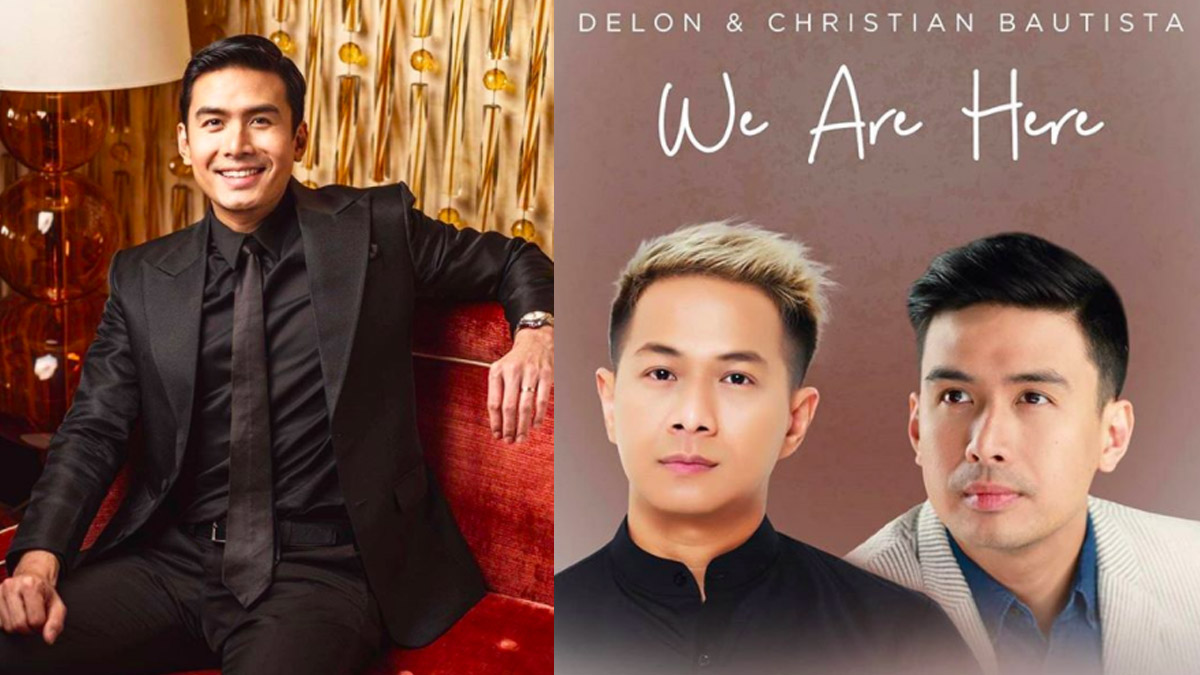 Pinoy balladeer Christian Bautista and Indonesian Idol Delon Thamrin record a song titled "We Are Here," which was composed by Christian.
PHOTO/S: @xtianbautista on Instagram

The pandemic has given Christian Bautista the time to write a new song and collaborate with Indonesian singer-actor Delon Thamrin.

Like Christian who was a finalist of the talent search Star in a Million, Delon was the IDOI Indonesia Season 1 grand winner.

As Christian found popularity in Indonesia through his song "The Way You Look At Me," he and Delon have known each other for a long time, often appearing together as guests in some shows.

Christian told PEP.ph (Philippine Entertainment Portal) that he and Delon had already discussed a collaboration even before the quarantine.

"You know, it was fate," Christian said.

"It was brought up during a fateful meeting, during a Ronan Keating concert in Jakarta back in February [2020]. He was a guest, I was a guest. Bunga Sitra Lestari [Indonesian actress-singer] was a guest.

"Then, I told him, 'Hey, we should work together again, because we sang together in a concert years ago.'

"When the lockdown happened, I called him up, 'Delon...' I said, 'Remember the thing we need to do? We need to do it.'

In an exclusive interview with PEP.ph on July 6 via video conferencing app Zoom, Christian and Delon talked about collaborating for the song "We Are Here," released by Universal Records.

Christian is currently in Manila, while Delon is in Jakarta, Indonesia.

According to the two singers, they recorded the song separately and everything happened virtually.

This was a challenge for Christian.

He said, "For Delon, he has access to a studio. So he was able to record in a studio.

"For me, during lockdown, I don't have access. So it was hard for me."

If not for the COVID-19 pandemic, the collaboration could have been Delon's chance to come and visit the country.

The Indonesian singer teased Christian about not extending an invitation to him, as he has never been to the Philippines.

Christian reassured him, "We will make that happen, bro. After COVID-19."

Christian composed the song "We Are Here" during the lockdown.

It took him only ten minutes to write the song.

He said, "I always say that I am not a very good songwriter. But for this specific song, I wrote it in about ten minutes.

"I was just in bed... thinking about the future. And then, I decided, I must create my own future. I will not let the future decide for me. So with God’s blessing and grace, we will create a future."

Delon said that when he first heard it, he knew the song could give encouragement.

"The song is a powerful song for everybody. And it can give spirit and encouragement. We hope that it would be a long life song."

Christian hopes the song gains worldwide popularity so it can inspire every nation, just like the 1985 song "We Are The World."

Of the song's message, Christian told PEP.ph, "The story is about friendship. It’s about camaraderie. Helping each others, helping strangers. Helping your country, your city. Making yourself available to be ready of help. That’s the main theme of the song."

CHRISTIAN AND DELON ON LIFE DURING THE PANDEMIC

Christian, 38 and Delon, 48, both started their singing careers in television singing competitions. Since then, both have ventured into acting and are also experiencing the early years of married life.

How is married life during the lockdown?

"Fantastic, likewise. We became deeper, we became closer," Christian said with a smile.

Delon added, "We became closer, we love each other."

PEP.ph noted that aside from their many similarities, Christian and Delon both come from countries that have the most number of COVID-19 positive cases in Southeast Asia.

Delon agreed and said, "This virus is very dangerous. Everyone in the world, Filipinos, Indonesians also, maybe with this song, we get stronger."

Christian added, "Delon also said that the cases in Indonesia are also rising."

To his friend, he said, "I want to tell you, Delon, in the Philippines, it’s still rising as well. So for me, I just hope and pray that the vaccine will arrive soon."

Christian also expressed hope that their fans would take the necessary precautions against the virus.

He said, "That the citizen, including myself, will still be careful when we go out.

"I understand the tagline, ‘Stay home.’ You know, I completely agree with that, but of course, some people have to work to provide for themselves and their family.

"So for those who have to work, please stay safe in your work environment.