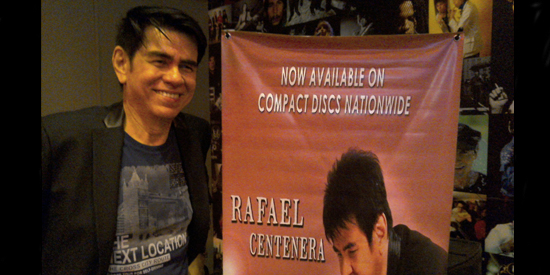 With his signature hit, "Missing You," Rafael Centenera established himself as one of the local music scene's popular crooners back in the ‘80s. However, he left for Malaysia and eventually got married while he was at the peak of his career.

“Sarah Geronimo,” beams Rafael Centenera when asked who tops his list of best recording artists list in the country today.

His other picks include Pilita Corrales, Gary Valenciano and Martin Nievera.

But wait. Who exactly is Rafael Centenera?

He may not be a household name to today's generation of kids, but his name rings a bell to those who are in their 50s and above.

Rafael was active in the local recording industry during the '80s with his signature song “Missing You,” but left the country at the peak of his singing career.

“I’m married to a Malaysian. My wife [Jenny Hui] is a famous fashion designer,” shares Rafael during his intimate birthday party held at the Centerstage in Quezon City last November 24.

HOMECOMING. He made a name for himself producing several albums in Malaysia. But after more than three decades of playing good music and performing for Malaysians, he decided to return home. The balikbayan singer pays homage to his kababayans. As he aptly says, there is no place like home. So what can he say about today’s music?

“Music now is more confusing because there are so many. Many songs… so you have to have real interest to dig which is the best.

Upon his return, Rafael produced his self-titled mini-CD album released by Saturno Music and distributed by Viva Records. It contains six tracks that include “Andrea,” “Basta’t Ikaw,” “Ako Pa Rin Sa ‘Yo,” “Bakit Ikaw?” “Sa Kanya Ba?” and “Sumayaw ng Salsa (duet with Asia’s Queen of Songs Pilita Corrales), most of which were composed by award-winning songwriter Vehnee Saturno.

Now fondly called Mr. Romantico, as coined by veteran entertainment writer and columnist Danny Vibas, Rafael is happy about the outcome of his album in the market.

“I’m quite happy with how our kababayans have been accepting my all-Tagalog album. It’s selling briskly and enjoying a lot of radio play both in Metro Manila and in the provinces,” he says proudly.

COLLABORATION. Admittedly, he owes it to Saturno for the magic spell cast in the album. It seems that the leading pop composer has returned the favor to the veteran singer through this collaboration. Rafael claims that he was instrumental in jumpstarting Saturno’s popularity in the music industry when he introduced him to James Dy, then President of Dyna Records. And the rest is history, he added.

His discovery of Saturno proves that he really has an eye for real talent. Coupled with his decades-long singing career, Rafael was asked to comment on those non-singers who produce their recording albums banking on nothing but their popularity.

“Will they last?” he shoots back, smiling.

TIMELESS MUSIC. Meanwhile, Rafael is here to stay as he plans to produce more and more albums. A music video is also in the works to introduce his music to the younger market through social media.

At his age, Rafael proves that music is for all ages.