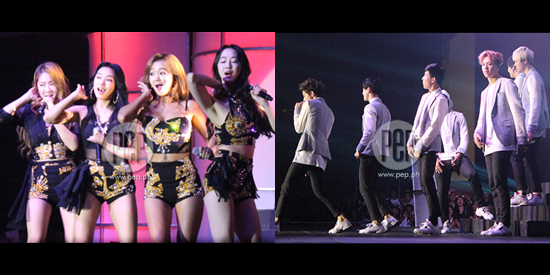 It was a fun-filled afternoon for Filipino K-pop fans as they flocked to the SMX Convention Center yesterday, December 28, for the 6th annual Philippine K-pop Convention. This year, three K-pop acts headline the convention—Sistar, GOT7, and Bernard Park.

Balladeer Bernard Park opened the concert with a performance of his latest single “Before The Rain.” Bernard is currently signed under JYP Entertainment after winning the third season of Kpop Star.

The 21-year-old singer also performed his version of Eric Benet's "Still With You" before ending his set with the classic hit 'Right Here Waiting" which he describes as "one of his most favorite songs" to sing on Kpop Star 3. Bernard also treated Pinoy fans with an a capella performance of Daniel Padilla’s hit single “Na Sa’Yo Na Ang Lahat.”

JYP Entertainment’s newest all-male group GOT7 was the second act to perform. This hiphop/dance collective is composed of Yugyeom, Youngjae, JB, Jr, Bambam, Mark, and Jackson. The group performed their songs “A,” “Gimme,” “Forever Young,” and “Girls, Girls, Girls.”

Their fans presented a surprise cake to mark the first anniversary of the group on January 16 and also to celebrate JB’s birthday on January 6. The fans were more than eager to sing him the happy birthday song.

The members of GOT7 played a guessing game with their Filipino fans. The members of the K-pop group had to place their hands inside a box and guess try to guess its contents using their sense of touch. Youngjae was the only one who didn’t get the right answer.

K-pop girl group Sistar—composed of Soyou, Bora, Hyolyn, and Dasom—was the last K-pop act to hit the stage. Sistar performed the chart-topping hits at the concert including "Touch My Body," "Alone," "I Swear," "Ma Boy," and "Give It To Me."

The all-female group also played a few games during their set. Their first challenge was to perform Ryzza Mae Dizon’s “Cha-Cha” dance. Dasom quickly outstaged the other members with her funny expressions, allowing her to win the challenge. Soyou won the second challenge, which is to deliver a beki line (gay lingo) in a sexy way. The remaining members, Bora and Hyolyn, had a gwiyomi battle that the former won.

Towards the end of their set, Sistar expressed their gratitude for their Filipino fans. Soyou even broke down in tears after watching a special video presentation made by their fans.


(To view photos of the Manila concert of Sistar, GOT7 and Bernard Park, CLICK HERE)

Read Next
Read More Stories About
Sistar, Got7
Celebrity Updates