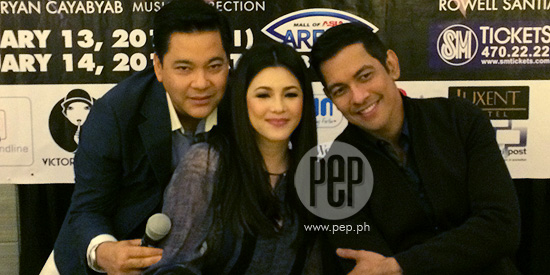 “We're all a-fee-able,” says Martin Nievera when asked about the talent fee given to him, Gary Valenciano, Regine Velasquez, and Lani Misalucha for their two-night concert Ultimate.

At the recent press conference of their concert to be held this February, Martin told entertainment reporters, “Fee is not an issue. All of us four wouldn't be here if we're not a-fee-able.”


This Valentine's concert will be held on February 13 and 14 at Mall of Asia Arena. It marks the first time that the Concert King, Asia's Songbird, Asia's Nightingale, and Mr. Pure Energy have come together for one major concert.

Martin mentioned that he even lowered his talent fee just so he could do what he loves to do, which is performing for his fans.

“The one thing that we four have in common is we love what we do,” said the Concert King.

“You'll be surprised with the amount of money that we would sing for because we love what we do so much.”

Gary is aware that some people may find the ticket price for their Ultimate concert a bit expensive.

Mr. Pure Energy pointed out, “We want to give people more than what they paid for.

“When they go out, it's beyond sulit sa binigay namin sa kanila.

“I'm speaking not just us being together on stage but even us as individual performers.

“I think that's something engraved in our minds, that we give them more than what they came to see.”

Martin added, “There are international stars that come here and people are willing to pay that amount of money for those.

“I don't discourage international [artists] to come here. But if you can afford those guys, you can get that from us.”

Then, he joked, “What you have right here are the future Hitmakers.

“When we get older I'll be Rico J, you're Hadji [points to Regine], you could be Rey Valera [points to Gary], Lani is Marco Sison. This is the future Hitmakers.

“I'm just saying that there's always going to be gig. I mean, look at the Hitmakers now, they're still selling venues.”

On a more serious note, Martin assured concertgoers, “More than anything, it's the experience and history of this group, it's priceless. I'm very excited about this.”