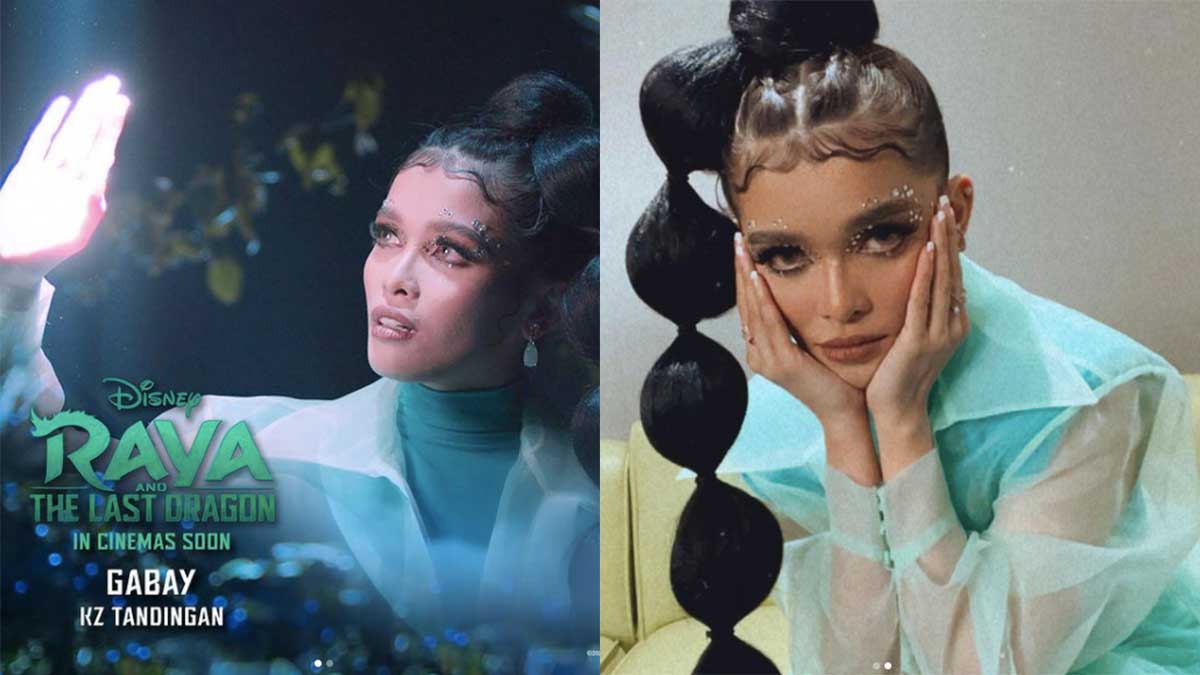 KZ Tandingan brings life to the first-ever Filipino Disney theme song "Gabay," which is for the movie Raya and the Last Dragon.
PHOTO/S: @kztandingan on Instagram

For the first time ever in its history, Disney is releasing a Filipino song to accompany its latest animated feature.

In the tradition of great anthems in the studio's catalogue, "Gabay" will appear on the soundtrack of Raya and the Last Dragon, which is set to be released in local cinemas soon.

Bringing the theme to life is Filipino singer KZ Tandingan, who is best known as the inaugural winner of the X-Factor Philippines in 2012.

Since then, she has built a name for herself as one of the country's most powerful vocalists and entertainers, and even competed in the Chinese TV series Singer 2018.

Disney posted a teaser on social media on Monday, March 1, 2021, about the voice behind "Gabay."

Many netizens guessed either Tandingan, Sarah Geronimo, or Morrissette Amon.

"I am very grateful and I feel very proud to be singing in my language, and show off its beauty to the rest of the world," Tandingan said in a release.

"I am proud to be part of history. I grew up watching Disney movies. Finally, there is a Disney Princess who I can feel a very strong connection to, and that is Raya as the first one inspired by Southeast Asia.

"I love that the song reminds us that sometimes we feel we are weak, especially when we are alone, but if we just learn to trust each other, to come together, and to unite, only then are we able to change the world," she added.

Raya and the Last Dragon's synopsis reads: "Set in the fantasy world of Kumandra, where long ago humans and dragons lived together in harmony, Raya (voiced by Kelly Marie Tran) will take us on an exciting new adventure to track down the legendary last dragon, Sisu (voiced by Awkwafina) to restore the fractured land and unite its divided people. But along her journey, Raya will learn that it will take more than a dragon to save the world.

"Raya and the Last Dragon is inspired by various Southeast Asian cultures and, as such, we found it fitting to launch 'Gabay' as a way for us to celebrate the film and connect with our Filipino fans," said Allie Benedicto, Studio Marketing Head of Disney Philippines.

"'Gabay,' the first-ever Disney track sung in Filipino, demonstrates our commitment to work with local creative talents to tell our stories in a locally relevant manner."

Early reviews for the film have been mostly positive, with RottenTomatoes calling it "another instant classic."

According to Disney, "Gabay" will be available for streaming on Spotify come March 5. Disney Philippines will also make the music video available soon on Facebook, Instagram, and Twitter.