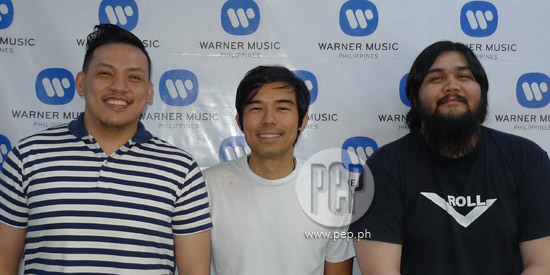 After five years away from the music scene, alternative rock band Hale is back together. The triple-platinum selling band that gave us hits like “Broken Sonnet,” “The Day You Said Good Night,” and “Waltz” is excited and raring to launch their new single titled “See You.”

We’ve been hearing rumors about the band’s reunion as early as last year, but now it’s official. The band’s members—Champ Lui Pio on vocals, Sheldon Gellada on bass, Roll Martinez on lead guitar, and Paolo Santiago on drums—have been busy working together for six months, writing and recording songs.

Hale sat with PEP.ph (Philippine Entertainment Portal) for an exclusive interview to talk about their comeback and what’s in store for the band and their fans.

“It's been a long time coming but we're very excited,” Champ said. “We don't get a third chance, this is it. We're just excited, we're ready.”

What triggered the reunion?

“I think deep inside we knew it hasn't ended yet,” Champ revealed to PEP. “Personally, I think we still have unfinished business in the industry and we're just a good fit for each other. It's really undeniable when we create music. When we play, it's home.”

A lot has changed in the last five years. When the group disbanded in 2010, each member pursued his own interest. Champ put up the indie record label Mecca Music, signing up Somedaydream as one of its artists. Together with fellow musician Chito Miranda, Champ also put up a resto-bar in Makati called 12 Monkeys.

Sheldon went to Canada and got married, forming a band with Hale’s drummer Paolo when he returned to the country. Roll also focused on recording his own music.

But creating music as a band eventually drew them back together.

“During the time that we disbanded, we all did our own stuff,” Champ recalled. “But it wasn't until Sheldon came back from Canada that it all started. So when he got back, the three of us met. Sheldon, me and Pao met. And I guess the next logical step was to meet up with Roll and catch up. So I think that triggered everything.”

Last year, the group started preparing for their comeback. “At the end of the day we still knew it was a process to get to where we are now,” Champ continued. “So we allocated time to prepare, to sync back together, establish that chemistry again. And that's what we did. Mid last year we decided, 'Okay let's allocate six months to record, to get in shape, write songs.’”

MORE MATURE HALE. What differences have they observed about each other over the years?

Champ pointed out, “I guess we’re just wiser. And it comes with age. But right now we're more mature and objective and just more respective of each other. I guess that's really the best foundation we could ask for, for this comeback. And everything else will flow naturally.”

Roll said their time apart was beneficial for all of them, “Because not only did we grow as men, but as musicians as well. So this time the opportunity is much more conducive for each of us. So I think it'll be really interesting what we come up with in the future, not just now.”

This early, the band has benefitted from the power of social media, as news of their reunion spread on the Internet after they played a surprise set during a birthday party at 12 Monkeys Music Hall & Pub in Makati City last January 13.

The event was for Monty Macalino, vocalist of the band Mayonnaise.

“We just wanted to surprise [Monty] because he actually helped us back in 2004 when we were starting,” Champ said about that night’s celebrant.

“He really helped us get gigs and just had our backs back then. So you know, we wanted that nice surprise, and it just so happened that during his party there were a lot of people from the industry and the word spread.” Photos of the band’s performance appeared on social media sites Facebook, Twitter, Instagram while videos were uploaded on Youtube.

Champ happily recalled, “Eventually a lot of bloggers got the materials from fans and started hyping it. So I guess it's the best thing that could have happened on a viral standpoint. And it happened very organically.”

Fans will have to stay tuned online for the release of “See You,” which will be available exclusively on Spotify tomorrow, January 27 until February 2. The single will then be available on iTunes and Deezer on February 3.

While it’s not far-fetched to expect a new album in the near future, the band wants to focus on their new single for now.

“We don't really want to spill some beans this early,” Champ explained. “But we're just really excited with what we created, with the music we've recorded. The energy is at an all time high right now. We feel like we're a new band starting over. And we're hungry. We're very passionate about this comeback. I think we're set to really surprise people with the music we've recorded.”