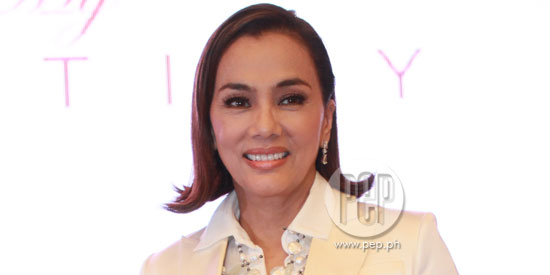 Kuh Ledesma, the iconic pop diva, is excited about her Valentine's Day show, which doubles as round two of the much-awaited reunion with her former group, Music & Magic.

The first Music & Magic reunion, after a hiatus of several decades, was held last year in October at the PICC, Pasay City.

The second reunion concert, dubbed The Music of the Heart, The Magic of Love, will be held at The Theatre, Solaire Resort & Casino on Kuh Ledesma excited about reunion with Music & Magic on V-Day 2015.

How different is the new show in terms of repertoire?

Kuh is partial to songs by British singer Adele. She has performed Adele's hit songs like “Set Fire To The Rain.”

She is not, however, performing songs by Taylor Swift. “Huwag na 'yan.”

REPEAT CONCERT. Kuh recalled the fun they had at the first Music & Magic reunion concert last year that they just have to have a repeat.

“Oo naman, we had so much fun the last time!

“On and off, 'pag nasa States ako, nagkikita.”

The U.S.-based members are expected to come home a week- and-a-half before the concert. Will they have enough time to rehearse?

“Kanya-kanya muna 'yan,” Kuh revealed, “We sent them the materials.”

What is the secret to keeping the magic alive all these years?

"At saka, even at their age, 'their,' kasi I'm younger, excited pa rin sila.

Kuh is also excited about performing at Solaire's The Theatre, a state-of-the-art performance venue because “it's supposed to be the best theater."

LOYAL FOLLOWING. Despite the competition from foreign and local acts come Valentine's Day, Kuh feels confident about their target audience.

Recalling an interesting tidbit about their show last year, she mused, “I believe in the results of the first show.

“We were actually very grateful to the crowd that came. It was Friday traffic...

“I kept saying, 'Wow, Friday, ma-traffic, 'tapos baha, it took us an hour to start because people were calling in, na hindi sila maka-ano, the traffic was not moving.

"But when we came onstage, maraming tao.

“So we said, 'Galing naman, bait naman nila.' These were really our following before—and friends.”

The West Coast is perfect as Music & Magic members Fe delos Reyes, Eva Caparas and Jet Montelibano are all based there.

NEW ALBUM. Aside from their upcoming concert, Kuh is working on a new album.

She confessed, “Recording has always been a challenge for me.

"Kasi ano, I have to prepare for it, and most of the time, busy ako.

“So I have to be in top shape. Hindi ako yung, 'Sige lang, isang take,' ganoon.

"Minsan, I have one take. Maybe I am hard on myself.”

Her last album, Memories, launched last year, consists of songs by well-respected composer, Cecile Azarcon. They are: “I Think I’m In Love,” “One More Try,” “So It’s You,” “Special Memory,” “Huwag Kang Mangako,” “How Did You Know,” and “Hello.”

The seven tracks also have minus one versions.

She is still working on her Ikaw album.

She hopes to finish the album by Valentine's Day or at the very least, release it as a digital album.

35TH ANNIVERSARY IN SHOWBIZ. Kuh is celebrating her 35th anniversary in the industry in 2015, and she is gearing up for a year-long calendar of activities including concerts, painting exhibits, and TV appearances.

“It's a family thing, supported by members of the government. Kailangan niyang gawin 'yan and she loves it.

Vicky fulfilled the role of first lady when her mother, Alicia Syquia, died during the Japanese occupation of the Philippines.