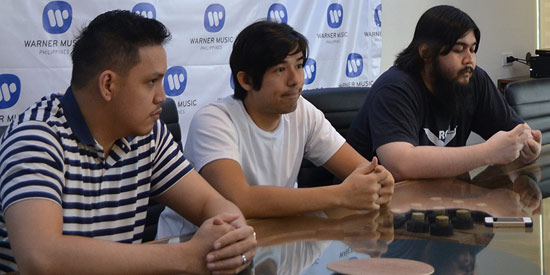 A documentary will come out next month depicting the ups and downs of the band Hale.

The wait is over for Hale fans as the band’s comeback single is released today. “See You,” Hale’s first song after disbanding in 2010, is available for pre-stream on Spotify.

Champ’s bandmate and Hale guitarist Roll Martinez let it slip that the song is actually about someone from Champ’s past. Bassist Sheldon added, “Ang daming pinaghugutan ni Champ, e!”

Although Champ has been vague about his romantic relationships, he was reported to have broken up with actress Bianca King in 2010. He was also linked to blogger Laureen Uy in 2013.

While the vocalist declined to reveal who inspired him to pen “See You,” he admitted that the song lyrics haven’t changed from when he finished writing them four years ago.

“Usually when I write a song it's just very raw and bare,” Champ told PEP. “It's usually just an acoustic guitar and a yellow paper and a pen. [The lyrics] are still the same. May ano, ‘I hate you.’ Hindi, joke lang!”

Champ then collaborated with the band for the song’s arrangement. “After writing it, I entrusted the song to my very much capable bandmates and true enough, I can't imagine the song being arranged or recorded differently. I think this is the best arrangement we can possibly have with the song. The real magic happened when we worked on the track.”

The result is a haunting song about a love that’s not forgotten. “There are people you meet in this life that leave a mark on you which is so undeniable,” Champ said. “That no matter how hard you try to forget them, and move on, you just cant.”

The track’s arrangement is done in the band’s signature style, one that fans will surely recognize. “See You,” distributed by Warner Music Philippines, will be available on Deezer and iTunes by February 3. The song’s lyric video also comes out today on YouTube.

While they had a hard time picking out their new single, “See You” won out for evoking a nostalgia that they want to convey to their fans.

The band members also recalled how their rehearsals and recording sessions went.

“During rehearsal it was kinda weird and awkward at first,” Champ revealed. “But then it didn't take us a while to really volt in and sync as a group. By the time we started recording, we were on the same page. We had that groove already, so it was very natural.”

Roll added: “I think this time around all of us know what our strengths and weaknesses are.

Fans can also watch for the band’s documentary, set to come out next month.

“It will narrate and show our ups and downs since the beginning that led to the comeback,” Champ said. “When we were conceptualizing the comeback, we were thinking of what would be nice to reconnect with our fans, our old fans. So I guess when we disbanded, it was sudden. So this documentary will shed light not just on everything that happened, not just during the disbandment but even before we got together. Like [us] individually as people, as musicians, as artists.”