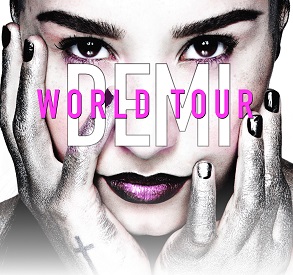 Demi Lovato will hold her second concert in the Philippines on April 30 at the Mall of Asia Arena.

Demi Lovato will return to hold her second concert in Manila on April 30, 2015, 8PM at the Mall of Asia Arena.

Due to insistent clamour from Filipino Lovatics, Wilbros Live is bringing back 12-time Teen Choice Awards winner, American actress, singer, and songwriter for a one-night only show.

Demi Lovato’s career boasts of multiplatinum hits, sold out shows, blockbuster movies, highest rating TV programs, thus solidifying her position as one of the most successful young female performers of all time.

Her second visit to Manila just proves how devoted her fans are to her. News of her second visit inevitably drew so much excitement that it trended worldwide on Twitter, a few minutes after the initial announcement.

Demi first debuted in Barney & Friends as a child performer, and was catapulted to prominence because of her role as Mitchie Torres in Disney Channel’s television film, Camp Rock, acting alongside the rock sibling band Jonas Brothers.

Following her rise to fame was a recording deal with Hollywood Records which resulted to the release of her debut album titled Don’t Forget, featuring numerous chartbusting singles that has endeared Demi all the more to her fans. The album was certified gold shortly after its release.

It was also around this time that Demi’s own television series, Sonny with a Chance, was launched and eventually gained momentum on the channel. Demi Lovato became the star of her own Disney Channel television show – an opportunity she was most grateful for. The series debuted in 2009, becoming one of the channel's most popular programs and making Lovato one of its brightest stars.

In 2008, Demi went on tour with the Jonas Brothers. The tour billed as Burning Up Tour served as a promotional avenue wherein Demi was able to massively hype her album. The tour was deemed rather appropriate and timely since most of the songs in the album were co-written by the Jonas Brothers themselves. It was a well thought of tour which somehow bolstered the popularity of both Demi and the talented band.

Demi’s sophomore album, Here We Go Again, was released in July 2009. This particular album showcased Demi’s laid back acoustic side, infused with melodic pop and rock sound. As expected, the album instantly soared to the No. 1 spot in the Billboard 200, thus helping Demi achieve worldwide recognition as one of the most successful female artists to reckon with. The album’s title track, “Here We Go Again”, was Demi’s highest peaking solo single at the time, skyrocketing to the top of the Billboard Charts.

Demi released her third album in 2011, which illustrated and fortified her R&B side. The carrier single, "Skyscraper," speaks highly of self-worth. It conveys a very relevant message to young girls her age. The heartfelt ballad eventually became an anthem. Demi was commended because of her wonderful rendition of this particular song. Her exemplary vocals combined with thought provoking lyrics proved as a sure fire formula for a potential record breaking hit.

In 2012, Demi propelled herself to new heights by becoming one of the X Factor judges along with critically-acclaimed personalities LA Reid, Simon Cowell, and Britney Spears.

The singer’s fourth album, Demi, was certified triple platinum in Brazil and Gold in Colombia, Canada and Mexico, becoming her biggest selling international album to date. Demi spawned the unforgettable hit song "Heart Attack" which peaked high on the Billboard Hot 100, becoming her third highest-charting single so far. The song, injected with electropop, was awarded 3x platinum in the US and is her fastest-selling single to date.

This overnight sensation excelled in various things—she proved to not only be capable of belting several complex octaves: she also acts, composes songs beautifully, and plays the guitar and piano. She also released a book called Staying Strong: 365 Days a Year which topped the New York Times bestseller list.

Demi Lovato, the singer behind the chart-topping hits “Give Your Heart A Break”, “Neon Lights”, “Really Don’t Care”, “Made in the USA”, “This Is Me”, “Skyscraper”, "Heart Attack” and many more, is once again poised to showcase her vocal prowess this April 30 at the Mall of Asia Arena.

Tickets are now available via smtickets.com or call Tel. No. 470-2222. Demi World Tour 2015 Live in Manila is another concert by Wilbros Live.