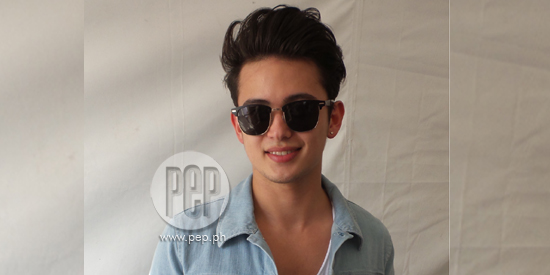 James Reid on working with Adam Hurstfield: “He has a very different style but he’s amazing. The product that came on, it was incredible.” James' second studio album will contain 12 original compositions.

James Reid is ready to release his second studio album during the first quarter of 2015. The Diary Ng Panget star has been busy working on his new album since late last year.

PEP.ph (Philippine Entertainment Portal) got to interview James about his upcoming album last Sunday, January 26, during the Yamaha Tricity launch at SM Mall of Asia Concert Grounds in Pasay City.

James was excited to share that his album will be out soon in time for the release of his movie Para Sa Hopeless Romantic, which also stars Nadine Lustre, Julia Barretto, Iñigo Pascual, Shai Carlos, and AJ Muhlach.

The singer-actor, however, wasn’t able to disclose the title of his newest album.

James told PEP, “My album is going to be released really, really soon.

“Hopefully, next month it will be out.”

James is proud to announce that he will release a 12-track all-original album. The ABS-CBN actor worked again with singer-producers Thyro Alfaro and Yumi Lacsamana, who were also involved in producing his self-titled debut album in 2013.

“But also from Adam Hurstfield, the Canadian producer.”

James was also had an active participation in writing and producing the songs in his album.

He said, “I helped Thyro and Yumi write some of the songs...I was really hands on with this.

“So we really worked together in the album.”

James also talked about collaborating with Canadian producer Adam Hurstfield. Adam has been working with Filipino artists including Sarah Geronimo for her Perfectly Imperfect album.

James told PEP that he was impressed by the songs that Adam produced.

He said, “He has a very different style but he’s amazing.

“The product that came on, it was incredible.”

The Talk Back and You’re Dead star gave a preview of what to expect from his upcoming album through his music video for the song “Huwag Ka Nang Humirit” that was released earlier this month.

Asked what his fans can expect from his new album, James said, “They can expect non-stop hits in every track in the album.

James added, “Most of them are upbeat tracks, very upbeat.

“It’s in different genres but always in pop, mainly the pop genre.”