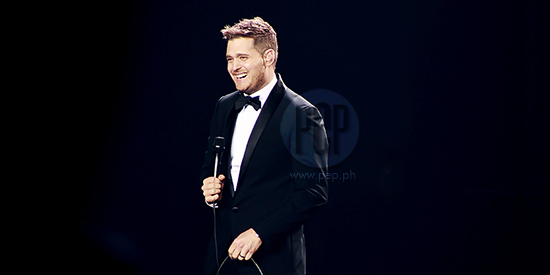 Michael Buble mentions Sarah Geronimo and Kris Aquino during his 2015 Manila concert. The Canadian crooner also dedicated a song to the Philippines.

During his Manila concert at the SM Mall of Asia Arena last Saturday, Michael Buble jokingly introduced the song "Come Dance with Me" as being written by Sarah Geronimo.

He even elaborates the joke by saying: "Second song for the night, I introduced as being written in 1946 by Sarah Geronimo.

"And you all looked and said, 'She wrote that?'

The singer was surprised to find out that Sarah was actually in audience, together with her boyfriend Matteo Guidicelli.

He asked the audience, "She's here?"

Then added, "You didn't write that song Sarah, I told you.

"You're here? What did you think when I said your name? Did you go like, 'Did he just say that?'

"I asked somebody who their favorite singer was here, and the guy said, 'Oh sir, Michael Buble sir, her name is Sarah, Sarah Geronimo.'"

He then greeted the singer-actress, "Hello, how are you? I did that in the very least creepy way I could do that [talking about the accent.]"

DEDICATES SONG TO THE PHILIPPINES. Michael also dedicated his song "Hold On" to the Philippines.

"Last night I did a TV show, she was very nice to me, named Kris Aquino," said the 39-year-old crooner.

"I was checking out her Instagram last night when I went home, her Instagram she Instagramed something the day before, and she just said that one of her favorite songs was the song 'Hold On.'

"And when we talked she said that it was a tough time for everybody her.

"I haven't done this song in many many years and I thought I would do it for you.

"You know what, this is a special night for me, and I hope that I could have done the right way, and I hope I do like it."

BUBLE SAYS "SALAMAT" TO FILIPINOS. Michael Buble also expressed his gratitude to the Filipino people, stating that Pinoys helped to boost his career.

"This is like the first place it happened for me," saying that he first gained popularity in the Philippines.

"I thank God for you, I really do.

"You changed my life without knowing that you did.

"This is real, this is not some BS that I spoke for the stage.