Songs we want One Direction to sing during their Manila concert 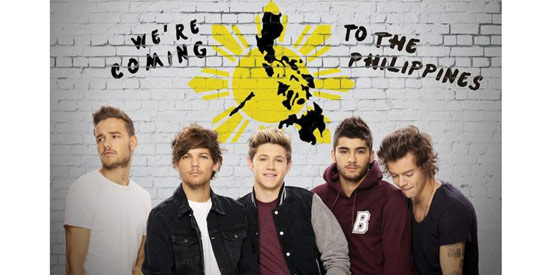 Without a doubt, the concert of British-Irish boy band One Direction is one of the biggest performances to watch this 2015. Tickets to the band's March 21 concert were sold out as early as May 2014, which prompted organizers to add another date (March 22) to the Manila leg of their tour.

Band members Harry Styles, Niall Horan, Liam Payne, Louis Tomlinson, and Zayn Malik will be visiting the Philippines for the first time, but Filipino fans are already in the thick of One Direction fever as their idols' 1D World store was unveiled at SM Megamall’s Mega Fashion Hall in December 2014.

Here are some songs we'd like 1D to perform when they go on stage here on March 21 and 22.

This single from 2013 could very well set an energetic tone from the very start of the show. Hailed by critics as a good homage to The Who's “Baba O'Riley”, the song peaked at the second spot of the US Billboard Hot 100 and won the Best Song of Summer award at the MTV Video Music Awards in 2013.

The lead single of the group's newest album, “Four”, makes us reminisce about Journey's “Faithfully”, and at the same time reminds us 1D's typical catchy beats. While its lyrics “Everybody wanna steal my girl/ Everybody wanna take her heart away/ Couple billion in the whole wide world/ Find another one 'cause she belongs to me” are staples for male groups, the song leaves an impression that the band has been maturing. It topped the singles chart in the United States on the day it was released and ranked No. 3 in the United Kingdom.

3. What Makes You Beautiful

The band's debut single is still a crowd pleaser even after they've already produced a number of hits since 2011. If the lyrics “Baby you light up my world like nobody else/ The way that you flip your hair gets me overwhelmed/ But when you smile at the ground it ain't hard to tell/ You don't know, oh oh/ You don't know you're beautiful” don't make fan girls dance and scream, we don't know what will!

The band proves that it can go beyond bubblegum pop with this mid-tempo pop rock song that makes us reminisce for classic Queen songs. “Rock Me” debuted at number one on the US Bubbling Under Hot 100 Singles chart in 2012 and received mostly positive reviews as a refreshing take from the album “Take Me Home”'s pop sound.

The new ballad from “Four” is significantly mature, not just with its tone but with lines like “Everything that you’ve ever dreamed of/ Disappearing when you wake up/ But there’s nothing to be afraid of/ Even when the night changes”. It's a welcome break from their more upbeat songs and a surefire way to calm the crowd down.

We still haven't figured out what the “one thing” actually is, but this catchy, bouncy song should be more fun to hear live. Maybe we'll figure out that one thing when we hear the boys sing it here in the Philippines.

If there's any 1D song fit for seranading, it would be this mellow folk ballad about little flaws that makes a person even more perfect. This sweet collaboration with Ed Sheeran also paid off well, as it debuted at number one in the UK together with the album “Take Me Home”, making the band the youngest ever to achieve this feat.

The band's single about heartbreak is another one for the books as it breaks out of their typical pop mold with its guitar-driven tunes. “Story Of My Life” may not be as catchy as their other singles, but the song shows off a level of maturity that we'd like to hear more in the future.

9. Where Do Broken Hearts Go

It's far from being a cover of the old Whitney Houston hit, but this could make its own mark for 1D as its strong beats make it sound more like an anthem. The tune is misleading for an actual song about heartbreak and loss, but it does show the band's more angsty side.

This cheerful song about growing old but not acting one's age would be fun to dance to, especially with its chorus, which sounds straight out of a classic Irish jig. And even if it's really about growing old, it still has the band's “forever young” feel.

PEPsters, what songs do you want One Direction to sing during their Philippine concert? Share your thoughts in the comments section below.