6 Reasons Why You Can't Miss Lenny Kravitz Live in Manila 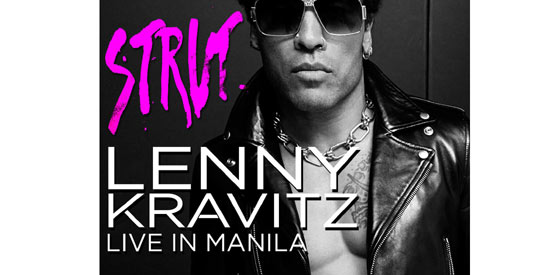 Lenny Kravitz LIVE in Manila will take place on March 24 at the Globe Circuit Events Ground in Makati City.

Lenny Kravitz, one of the most distinctive and successful recording artists of the past quarter century, is about to set foot in Manila for an amazing concert. MIDAS Promotions, the company responsible for sold-out concerts in the Philippines and the rest of Asia, is proud to present Lenny Kravitz LIVE in Manila this March 24 at the Globe Circuit Events Ground in Makati City.

Just what are the reasons why one shouldn’t miss this musical extravaganza? We’ll make things easy for you and list them one by one.

2. Hit Songs. The tracks “Again”, “It Ain’t Over Till It’s Over”, “Are You Gonna Go My Way”, “Fly Away and “American Woman” are anthems that one cannot forget.

3. Multi-talented performer. Kravitz's talents as a writer, producer and multi-instrumentalist have resonated through nine studio albums into a timeless catalog. He plays guitar, bass, keyboards, drums and percussion on songs in his albums. The concert is the perfect event to showcase all this talent.

4. Singing icon. He is regarded as one of the preeminent rock musicians of our time, and has successfully transcended genre, style, race and class into a 20-year musical career, one which revels in the rich influences of '60s and '70s soul, rock and funk. A definite party to the ears when you hear him live.

5. His appeal is widely recognized by his peers. His collaborative efforts are as varied as his own influences, having worked with Slash, Aerosmith, Jay-Z, N.E.R.D., Mick Jagger, P. Diddy and Alicia Keys. He also produced the song "Justify My Love" for Madonna, which he co-wrote with Ingrid Chavez.

6. Well-rounded artist. He's not just a musician. He’s also an actor. Having sold over 38 million albums worldwide, Lenny Kravitz’s musical success has afforded him many opportunities to fulfill his creative vision beyond the recording industry. The artist appeared in a supporting role in the critically-acclaimed film Precious, and the box office smash film The Hunger Games as Cinna. He reprised this role in the second film which was released in Fall 2013. Lenny was also seen in Lee Daniels’ The Butler (The Weinstein Company) alongside Forest Whitaker and Oprah Winfrey.

In 2014, Lenny Kravitz debuted his 10th studio album, Strut. Kravitz is currently on an extensive world tour, and has chosen Manila as one of its stops. He will be performing songs from Strut as well as from a distinguished career that has made him one of the most admired recording artists of today.

It’s going to be a great loss to miss seeing this living legend perform.

Tickets are on sale at Ticketworld Online or call Tel. No. 891-9999. Ticket prices are as follows: