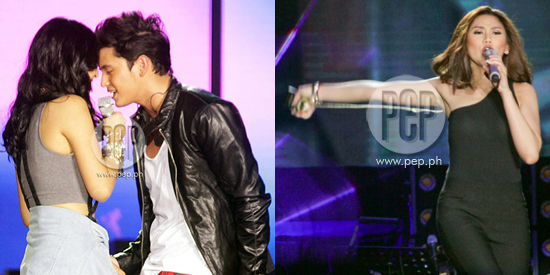 Sarah Geronimo (right) as well as James Reid and Nadine Lustre (left frame) got the loudest cheers from the crowd at Fusion 2015: The First Philippine Music Festival. The event was held last January 30 at the SM Mall of Asia Concert Grounds in Pasay City. (To view photos, click: Part 1

Top local acts took the centerstage in one of the biggest Original Pilipino Music (OPM) festivals held in the country. Dubbed as Fusion 2015: The First Philippine Music Festival, the event was held last January 30 at the SM Mall of Asia Concert Grounds in Pasay City.

As early as 3 PM, fans started flocking the venue that was filled with various booths. Audiences also had the chance to enjoy pre-concert performances while waiting for the main OPM acts.

The music festival started out with a bang—almost all the artists including James Reid, Nadine Lustre, Tippy Dos Santos, Sam Concepcion, Basti Artadi, Joey Ayala, Gloc-9, Yeng Constantino, and many others gathered on stage to perform the theme song of the concert aptly titled “Play As One.”


Tutti Caringal of 6CycleMind emerged on stage dressed up as a soldier and dedicated the song “Sandalan” for the fallen soldiers. The band also performed the more upbeat track “Kung Wala Na Nga” during their set.

The Dawn, led by Jett Pangan, dedicated a medley of the songs "Iisang Bangka,” “Salamat,” and “Tulad Ng Dati” to the fallen heroes.

Concertgoers sang along with Parokya Ni Edgar during their performance of their hits “Buloy” and “Pangarap Lang Kita,” among others.


Chito Miranda was happy to meet the crowd since it was his comeback performance as a married man. The Parokya ni Edgar vocalist tied the knot with actress Neri Naig for the second time in December 2014.

Kamikazee peformed on stage a few days after they announced that they would lie low in the music industry. The band performed “Halik” and “Doo Bi Doo.”

Other rock bands who performed at the concert include Wolfgang, Franco, and Urbandub.

POP FUSION. Rock is probably the most popular genre in the OPM scene, but pop music is also making it’s way to the top with performances from Nadine Lustre, Tippy Dos Santos, James Reid, and Sam Concepcion.

Nadine and James heated up the stage with their performance of “No Erase” form their hit movie Diary Ng Panget. For their solo performances, Nadine sang “Para-paraan” while James performed his latest single “Huwag Ka Nang Humirit.” Meanwhile, Tippy and Sam performed their 2013 hit single “Dati.”

Asia’s Romantic Balladeer Christian Bautista performed “Liwanag Sa Dilim” and “Ngiti” while R&B Princess Kyla performed one of her hit songs “Hanggang Ngayon” and “Salbabida” which she dedicated also to the #Fallen44. Pop Rock Princess Yeng Constantino treated audiences with her hits “Chinito” and “Time In.”

The Voice of the Philippines coaches Sarah Geronimo and Bamboo Mañalac’s performances also wowed the audience. The Popstar Princess and the rock icon shared the stage with their performance of Bruno Mars’ “Uptown Funk.”

Sarah G. also gave an energetic performance of her recent chart topping hits “Ikot-ikot” and “Kilometro” from her album Perfectly Imperfect. Meanwhile, Bamboo got the crowd going with his performance of “Hallelujah” that he also dedicated to the fallen PNP SAF members. Bamboo then toned it down with an acoustic track “Much Has Been Said.”

RAP MASTERS and CLASSICS. Gloc-9 led the rap masters who performed at the Fusion Music Festival. Gloc-9 performed his hit “Sirena” with Ebe Dancel and “Businessman” with Lirah Bermudez. Meanwhile, Abra also got the crowd going with his intense rapping for his songs “Ilusyon” and “Gayuma.”

Andrew E got the crowd going with the classic rap song “Humanap Ka Ng Panget” and gave out the white jacket he was wearing that night.

OPM veterans Gary Valenciano, Joey Ayala, and Noel Cabangon did not fail to impress the crowd with their songs. Nostalgia filled the air when Mr. Pure Energy Gary Valenciano performed “Di Bale Na Lang” and “Ipagpatuloy Mo Ang Galing Ng Pilipino,” which he dedicated to SAF members who gave up their lives for the country.