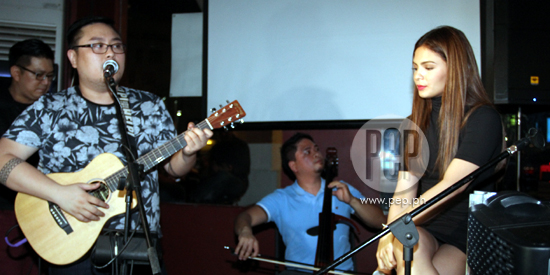 
The members decided to join a band competition for Converse the following year. The band’s name was taken from the first syllables of the lead vocalist’s name hence the name Brisom was formed. The band participated in a lot of music festivals in 2014 and has opened the Asian tour of the international bands Chvrches and Dishwalla.

Brian told PEP, “Last year, we had the chance to open to a lot of artists.

“And you know, it’s been a blast last year so grabe, we’re just really thankful.

“We’re really looking for ward more on branching outside of the Philippines so ayun.

Their first EP is still available through online and physical distribution. There are plans for the band to release a new album soon.

Brian said, “It’ll available up to now and this May, we’re going to release a new EP.

“Wala pang pangalan but we’re working on it.

“So it’s gonna be a five-song EP again.”

Brian also revealed that they are planning to work with differents artists for a possible collaboration but the band wants to focus on their music first.

He said, “I’m still asking a lot of musicians.

“I can’t name them yet but so far, kami muna.

“Brisom muna as a band.”

“BIGKAS.” The band has been playing “Bigkas” in their past gigs even before they officially released it as a single.

“We’re still thinking if we’re going to include it sa EP namin.

Terence, the band’s guitarist, worked on the lyrics of the song three years ago while Brian helped in arranging the song.

Brian told PEP, “Terence Teves, my guitarist sa Brisom, wrote this song tapos when he presented it to me sabi ko, ‘Bro, this is a beautiful song so I will help you arrange the song.’

Then came in Lovi. The band vocalist revealed that he met Lovi through a common friend and was pretty impressed after watching her perform live also at Cable Car restaurant.

“I know she started as a singer.

“So when heard her sing this song [“If I Ain’t Got You”], sabi ko bagay na bagay talaga.

Catch Brisom perform their latest single with Lovi Poe this Sunday, February 15, on Sunday All Stars.