Matt Monro Jr. and The Platters reveal what they like most about Filipinos 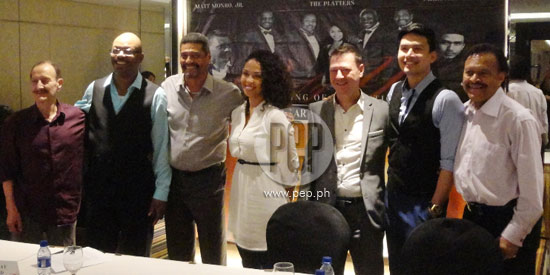 Two days prior to the Only You: An Evening of Romantic Music, members of the press met up with the performers at the Jen Hotel along Roxas Boulevard.

English crooner Matt Monro Jr. and The Fabulous Sounds of …. The Platters are in the Philippines for their Valentine’s Day concert to be held at the Philippine International Convention Center (PICC) Plenary Hall as well as the Newport Performing Arts Theater, Resorts World Manila on February 16.

The performers arrived late as their courtesy lunch call on Manila Mayor Joseph “Erap” Estrada was extended by half an hour and they got caught up in Metro Manila’s horrendous traffic on their way to the hotel. The 30-minute press conference started by 3 PM with questions for Matt Monro Jr.

The 50-year-old Matt Monro Jr. embarked on his music career at least a decade after his dad and legendary crooner Matt Sr. (known as “The Man With The Golden Voice”) passed away (he died on February 7, 1985).

The younger Monro trained for years before attempting to record his first album or sing professionally. He made a name for himself by showcasing his father’s work to large crowds internationally, continuously performing 50 to 60 annual city tours around Europe to date. While working on creating his own legend, he was grounded enough to acknowledge that he still has quite a long way to go.

A seven-time Manila visitor, Matt loves this country where he’s an absolute superstar (everywhere else in the world, he can walk down the street without being recognized). He also particularly likes the Filipinos genuine and deep love for family.

Matt narrated that in 1977, when he was just 13 years old, he was invited by his father to join him on stage to perform a duet. He never got to do that again. However, a special highlight during the upcoming concert would be a video duet with his late father made possible by the magic of digital technology, pretty much like what Natalie Cole has done with her dad Nat King Cole.

The Fabulous Sounds of …. The Platters is composed of Bernardo Cassar, Reginald Carter, Donne Ray Bradford, John Cheatdom and Savanna McClendon, the lone female in the group.

Donne, the spokesperson of the group and first-time Manila visitor, is impressed by Filipinos’ love of music. They got to personally see the Pinoy’s natural talent for singing while watching a Filipino singer perform in the hotel. Asked what the Filipinos could expect from their concert, Donne answered “Love, love and love.”

When Christian Bautista, one of the most acclaimed Filipino balladeers of his generation (with a following in Indonesia, Singapore, Malaysia and Thailand), was asked how he feels about sharing the stage with these world-class performers, he answered that he was “nervous but excited.”

Another reporter asked him if he was familiar with The Platters songs (compositions that were popular possibly before Christian’s parents were even born). He admitted he was no stranger to these songs as a lady once asked him to perform Platters songs for the golden wedding anniversary celebration she was planning with her husband, something he readily and happily obliged.

When the performers were asked what songs were most anticipated during their concerts, Matt readily answered “My Way,” a Frank Sinatra (the man with whom he was so often compared) staple and a favorite Filipino videoke request as well as “Yesterday” (a Beatles hit first sung by Matt Sr.).

The Fabulous Sounds of …. The Platters often get requests for “Portrait of My Love.”

As for Christian, he is best known for “Color Everywhere,” “Hands To Heaven” and the immensely popular “The Way You Look at Me,” the song that virtually catapulted him to stardom.