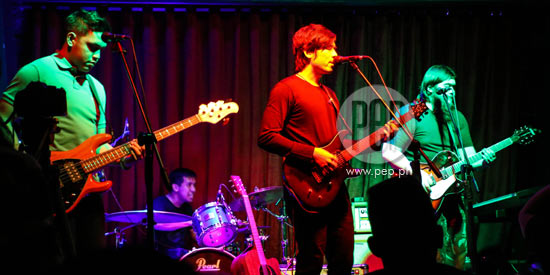 Radio station RX 93.1 regularly holds a show called Concert Series where they invite singers, both local and foreign, bands and singular musicians to sing and jam for one straight hour.

Through text messaging with DJ Rico asking the questions on air, Hale answered these questions and gave us a sneak peek into their newly reformed band still composed of Champ Lui Pio, Roll Martinez, Sheldon Gellada and Paolo Santiago.

When Hale first started a decade ago, the music landscape, especially the world wide web was vastly different. Back then, yahoogroups were popular as ways of connecting with other users. Everyone had one or multiple accounts. Now, Hale comes into a digital world where Instagram, Twitter and other social media sites dominate. How do they feel about all these big changes?

Hale frontman Champ answers, "we're actually in unfamiliar territory, kasi, times have changed. It's not 2005 anymore. And we're excited, because everything is like new to us: our first practice, our first guesting, our first recording."

Today is the age of Spotify and Netflix. Hale is well aware of the changes as they have experienced them, just like us.

"Five years, you know, does that to you. For us right now, the energy is just really different, we're like a new band starting over again, and we don't take it for granted because you know second chances sometimes they don't, they don't arrive everyday. For us, it took five years for that second chance to arrive," Champ states thoughtfully.

How has it been for them, together for five, apart for five, and now back together again?

"I think everybody grew personally and musically and I think it comes with the territory... With the whole experiences and lessons learned from the past five years, but I think the most important thing is, we're still staying true to ourselves, branching out as far as possible, music-wise..."

Had they considered getting back together before this? We're sure they were asked many times over if they would ever get back together.

"Uhm, probably friends and family, but I think they understood na we were working on different things. We're just appreciative of especially, some of the people who supported us through highs and lows."

Now that they are getting into the gig scene again, Hale is learning to use social media to their advantage. They joined Instagram four weeks ago, posting nearly everyday and using hashtags like #HaleComeback and #Halers (what their fans are called).

We want to know who is in control of answering comments and posting, and Champ admits, "Warner Music! Well, it's more of a collaboration. Coz back then we only had yahoogroups and I think we had Friendster, Multiply... Our mindset right now is we're learning every day, the landscape has changed. And, we're students of life."

How did Warner Music become their label? Before they disbanded, the band was signed with PolyEast Records and EMI Philippines.

Champ jokingly admits, "actually, they bribed us with a signing contract, we couldn't say no to that. I'm kidding...

"To be honest, when we were planning the comeback, we weren't really decided on signing because I've been working with my own team of producing musicians for the past five years. The idea of signing wasn't really on the table back then. But, I had a brief meeting with Latch, the general manager of Warner Music and she was actually asking for artists from Mecca Music," Champ explains.

Mecca Music is an independent music label that Champ started in 2011.

He continues, "then, I don't know, that day, I just felt her good energy and then I brought it up. I said, it's a secret [Hale reuniting], but maybe, if you're interested, we can work together. I don't know, it was such a pleasant meeting...

"We signed around October, it took a few months for us to really sign. But that meeting really started everything. I think the universe kinda told me, working with Warner Music is...the way to go," he recalled.

Do they feel 'old' coming back into a music scene peppered with young teenage musicians and EDM?

"We don't want to put that pressure on us right now, to be honest, we're just happy to be back and to be playing again. More than anything, that's it. We've been working on some new materials that we decided to share, and I think are different, we've never done something like that before, so it's pretty interesting from our end and from the listener's end."

Any surprises in store with the new album? Champ answers vaguely, "with the new album, we kept it in-house, but I think the sound is different in a good way. I think it grew with us so hopefully, as the songs go, I hope everyone likes it."

Since they wouldn't divulge the release date of their new album, we'll just have to keep following them on Twitter and Instagram. Champ says, "we will be updating everyone soon, for that. To be honest, we have a lot of catching up to do with just gigs and we're still a work in progress, live-wise, it's a day to day basis for us. We're constantly practicing, constantly just promoting. As much as we wanna talk about the new album that's coming out, it's better we keep it a secret for now."

He adds, "it's really, it's something we're very proud of. We've worked on that album for six months, the longest we've ever worked on something, so it should be something worth expecting."

As Hale comes back, another OPM band bows out. Kamikazee has been a dominant force the past couple of years and Champ shares how they feel about Kamikazee going their separate ways later this 2015, "we're very good friends with them. I actually haven't spoken with Jay [Contreras, vocalist of Kamikazee] but I think it's just right we do a show together....Hopefully soon at 12 Monkeys," he revealed.