David Pomeranz returns to the Philippines for his Greatest Hits album 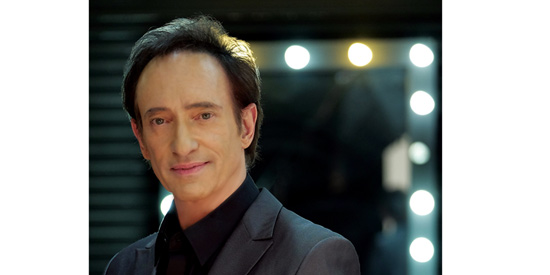 David Pomeranz composed a song that will be used in an animated film titled Max and Me that will be released in 2016.

Nakilala ang 64-year old New York-born singer and composer dahil sa kanyang mga classic hits na “Got To Believe In Magic” and “King & Queen of Hearts” na nakasama sa soundtrack ng 1982 hit comedy na Zapped.
“I am very thankful that people know me because of those two songs. They are being played like forever during junior-senior proms.
“Especially the Pinoys, they love listening to my songs over and over again which is very great. I love that Filipinos are really lovers of good music,” ani David nang makapanayam namin siya sa Dong Juan Restaurant in Mother Ignacia Street, Quezon City.
David turned a year older last February 9 and nag-celebrate nga raw siya sa kanyang flight to Manila.
“I had my birthday on the plane. I was flying to Manila because I did two shows last February 12 in Subic and then last February 14 which was Valentine’s Day at Rizal Park.
“Both were free concerts and lots of people came. I was fun because you could tell how much they love the music I was singing for them.
“Then me, my wife and my son who is 13 years old now, we went to Boracay to have a quiet vacation. It was a really beautiful place and we all had fun there.”
Sa kanyang bagong album na Greatest Hits, included ang kanyang classic hit na “Born For You” na naging national anthem na ng mga lovers.
Kasama rin sa album ay mga songs niyang “On This Day”, “The OId Songs”, “Until I Fall in Love Again”, “Undying Admiration”, “Trail of Broken Dreams”, “Tell Me”, “If you Walked Away” (duet with Sharon Cuneta), “Tryin’ to Get the Feeling Again” (a song he wroted for Barry Manilow) and “Devoted to You”.
May bago rin siyang sinulat na single titled “Crazy Beautiful”.
Nilinaw ng mga taga-PolyEast na hindi ito ang theme song ng pelikula nila Daniel Padilla at Kathryn Bernardo na pareho ang title.
Bagay na pang-wedding song ang awitin na “Crazy Beautiful” at hindi malayong maging paborito rin ito ng mga Pinoy tulad ng kanyang “Born For You”.
Tinanong namin si David tungkol sa kanyang writing style. Saan ito nanggagaling and does he write it just for the money?
“I love writing songs that people will get to appreciate for many years and generations to come. That for me has no price.
“It’s something that I do best. I just don’t write songs just because I get paid for it. I do it because it comes from the heart.
“I’ve tried writing songs because I was commissioned to do it. And I tell you, it was bad. I mean, these are the works that I am not really proud of doing.
“That’s why it takes me a long time to come up with a new song because I have to find that inspiration in me. When it comes, the words and music just flows out.
“Earning money is great but it’s not something that would last.
“I want a song that will last and people everywhere will be able to sing it with that love in their hearts,” ngiti pa niya.
May sinulat na song si David para sa soundtrack ng isang animated film titled Max and Me na ipapalabas pa in 2016.
“I wrote this song titled ‘Here In My Heart’. It will be sung by Ann Wilson of Heart.
“When they told me the story of Max and Me which is about a Catholic priest, that started me writing and I came up with that song.
“It’s a beautiful song and I hope it touches a lot of people’s hearts just like my other songs.”