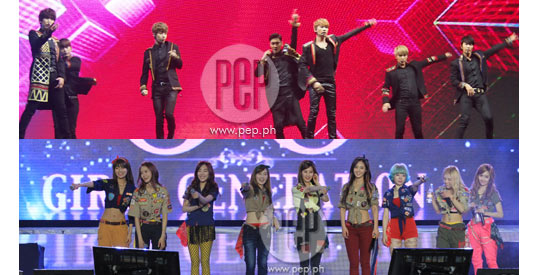 Super Junior and Girls’ Generation will join forces with Korea’s hip, up-and-coming star, Red Velvet, for the Best of Best in the Philippines on April 12 at the Philippine Arena.

The Korean Wave, or hallyu, has put Korea on the map as the entertainment and pop culture capital that the world looks up to when it comes to the latest in fashion, films, trends, and most especially, music.

One of the forerunners of hallyu, Super Junior (SuJu) is no stranger to this amazing phenomenon. No other Korean group has achieved extraordinary success as they had, sweeping fans of all ages, not only in Asian countries such as Japan, Thailand, China, Taiwan, among others, but also in Europe as well – garnering solid fans in France, Germany, and the UK. The 12-member boy group debuted in 2005 and defined the idol genre by covering all forms of entertainment – from singing, hosting, acting, and modeling. Their hottest hits include “Sorry Sorry,” “Bonamana,” “Mr. Simple” and “Mamacita.”

SuJu’s sister group from the same company, SM Entertainment, Girls’ Generation, is the epitome of girl power as the eight-member group garnered international fame through their trademark upbeat and catchy songs, unforgettable dance moves, lively personality, and incredible stage presence. The beautiful girls are trending worldwide for their fashion sense, beauty, and talent. Several of the girls namely Yoona, Sooyoung, and Yuri have made a successful crossover to the world of dramas, starring alongside Korea’s A-list actors. Girls’ Generations’ phenomenal songs “Gee,” “Genie,” “I got a boy” and “Mr. Mr.” garnered record hit sales and millions of followers.

With SuJu and Girls’ Generation setting the stage and opening opportunities for other artists to enter the world music scene, a new batch of upcoming talents are on the rise. Following the international clamor for KPOP stars, Red Velvet, a four-member group of multinational origin that combines a balance of fierce, cute, and youthful image. They are the latest group to debut in 2014, with hit songs “Happiness” and “Be Natural.”

The Philippines is no exemption when it comes to being swept up by the hallyu wave. With a solid Filipino fanbase, all four groups, including the special guest performer, will finally greet their followers and astound them with amazing performances on April 12 at the Philippine Arena.

This is not the first time that SuJu and Girls’ Generation have been in the country, as they have filled concert stages to the brim with delighted, screaming young fans. The younger group, Red Velvet, is set to make records once again with an explosive concert and never-before-seen performances they prepared especially for Filipino fans.

Shuttle express to and from the Philippine Arena will be available with minimal charges.