Crosby, Stills & Nash to give Manila a blast of the past on March 16 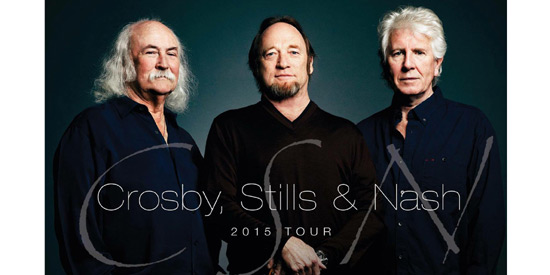 Catch rock’s legendary group perform its greatest hits when Crosby, Stills & Nash (CSN) visits Manila for an evening of soft-rock songs and beautiful harmonies during a concert on March 16, 8 pm, at the Smart Araneta Coliseum in Cubao, Quezon City.

The historic one-night musical event from Ovation Productions, dubbed An Evening With Crosby, Stills & Nash, is part of the legendary American trio’s 2015 Asian tour that also includes several key cities in Japan as well as Singapore.

It is expected to draw a huge turnout of rock fans, mostly Baby Boomers lured by the sound of the legendary act considered as rock’s first super group and widely credited for some of the most enduring songs and wonderful harmonies of the 1970s.

Concertgoers shall experience an exciting blast from the past as the powerhouse folk rock group presents its fabulous collection of close, high harmonies and soft rock songs, such as “Suite: Judy Blue Eyes,” “Marrakesh Express,” “Woodstock,” “Our House,” “Teach Your Children,” “Long Time Gone” and “Carry On.”

Other classic hits in its song list include “Just A Song Before I Go,” “Wooden Ships,” “Almost Cut My Hair” and “Love The One You’re With.”

Composed of David Crosby (vocals, guitar), Stephen Stills (vocals, guitar, keyboards) and Graham Nash (vocals, guitar), Crosby, Stills & Nash brought harmony to the forefront of popular music with its unique three-part vocal blend that turned out hit songs that sold millions of albums and were imitated throughout the 1970s.

Moreover, with its emphasis on singing and songwriting above all else, it contributed to the evolution of the singer-songwriter movement during that era.

Born out of famous groups that placed a premium on harmony, Crosby, Stills & Nash boasted impressive individual credentials before its three members came together in 1969: Crosby sang and played rhythm guitar with The Byrds, Stills was a mainstay of Buffalo Springfield, while Nash provided the high harmonies that helped make pop sensation of The Hollies.

Stills and Crosby began writing songs together in 1968 after Buffalo Springfield broke up (The Byrds already split up a year earlier) until they were joined soon thereafter by Nash who had just quit The Hollies. The trio performed together for the first time at the Los Angeles home of Cass Elliot of the Mamas and Papas.

The three made an instant impact on the music industry in 1968 by helping steer rock to a more contemplative, song-oriented place with its classic debut album simply titled, “Crosby, Stills & Nash” early in the summer of 1969, a few months before the Woodstock Festival, where it played its first-ever concert as a trio.

The album quickly attained the stature of a mega-hit as it yielded such classics as “Suite: Judy Blue Eyes,” “Wooden Ships” and “Long Time Gone.” It was followed a year later by “Déjà vu,” a more eclectic and electric endeavor brought about by the addition of the rhythm section of Dallas Taylor and Greg Reeves.

In 1977, CSN went on to release an album that yielded a Top Ten hit with Nash’s “Just A Song Before I Go,” while “Daylight Again” (1982) produced another Nash-penned hit, “Wasted On The Way.”

While each member has pursued a solo career – with Crosby and Nash teaming up as a duo for most of the ‘70s – Crosby, Stills & Nash has increasingly become an artistic home base for the trio.

In 1977, Crosby, Stills & Nash released the quadruple platinum, “CSN’” which included “Just A Song Before I Go” (No. 7, 1977), followed the following summer by a tour as an acoustic trio.

David Crosby, Stephen Stills and Graham Nash have been inducted into the Rock and Roll Hall of Fame twice – first with CSN and later with The Byrds, Buffalo Springfield and The Hollies, respectively.

They have also been inducted into the Songwriter’s Hall of Fame in recognition of their achievements as a group with CSN and as individual members doing solo acts.

An Evening With Crosby, Stills & Nash is presented by Ovation Productions. Tickets are available at all Ticketnet outlets and online at www.ticketnet.com.ph