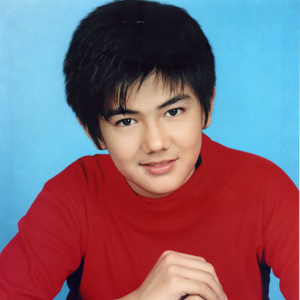 Miguel Aguila has just released his self-titled debut album under Warner Music Philippines at the young age of 13 years.

While most kids his age are busy playing with the latest toys and gadgets, 13-year-old singer Miguel Aguila is already diversifying his career tack.

Discovered in 2006 when he emerged as grand champion in the SM Star Club as "Munting Star," Miguel is already a veteran of sorts, having appeared as an actor for stage productions, TV and film including stints in Spolarium, Majika, Dadi Di Do Du, I Will Always Love You, and Ina, Anak, Pamilya, among others.

He is also an image model for Garfield Sportswear and an endorser pushing Kameraworld and GroTall Multivitamins.

Just recently he also conquered the world of dance by winning the grand plum in ABC-5's "Shall We Dance: Kids Edition."

For his many feats, Miguel has already received many awards and citations, including Aliw Awards Best Child Performer for three consecutive years—a feat that ties him with international artist, Lea Salonga, which also eventually allowed for him to be elevated to the Aliw Awards' Hall Of Fame.

Not one to rest on his laurels, the young singer is set to conquer new frontiers with the release of his self-titled debut album under Warner Music Philippines.

PEP (Philippine Entertainment Portal) spoke to Miguel during his album launch last February 22 at Pilita's Restaurant in Greenhills Shopping Center Promenade. Miguel admits he has "long been dreaming of this."

"I've wished to have an album of my own ever since I was little," he exclaimed, even as he confessed to being a "bit scared" with how people will receive the album.

Unlike the usual release for artists his age, his debut album highlights his love for standards to vividly display his unique crooning style. Lined up in the CD are remakes of classic songs including "Sway," "Besame Mucho," "La Vie En Rose," "Somewhere Over The Rainbow," and "Mona Lisa."

Explaining his decision to include a big number of classics rather than contemporary numbers for his first collection, Miguel acknowledged that he finds these tunes "quite timeless."

"I know they're not popular among kids my age but they've been part of my repertoire for the longest time. My mom and dad love them and so does my audience. These songs have a timeless quality that is unique and beautiful."

Nonetheless, he reaches out to the pop-inclined listeners with his stirring cover of Alamid's "Your Love" and also puts special touch to popular inspirational ditties like "Warrior Is A Child," "Lead Me Lord" and the carrier song "Someone in the Dark," which he recently performed in a video with Treb Monteras.

Since the young crooner has yet to reach puberty, we asked the young boy if he is worried that his voice will soon change.

"Not really. If that happens anytime soon, I'll probably rest for a while then make a comeback as soon as I get the chance to adapt to the change on my vocal chords."

Well said, indeed, but what about being clawed at by millions of female fans—is he ready for that?

Miguel smiled: "I don't know. I'm just a kid. All I want is just to keep doing what I love, which is performing. If it means being embraced and accepted by many, then I welcome it."