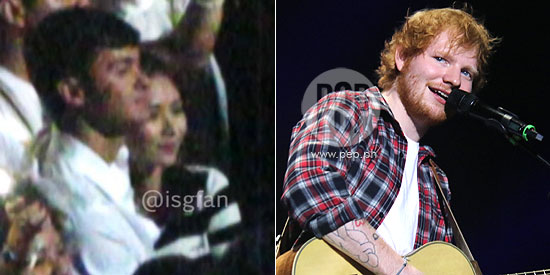 Consistent and obviously self-sufficient on stage, Ed Sheeran impressed Pinoy fans with his signature dramatic crooning as well as lyrical flow in hit songs at his March 12 concert at SM MOA Arena. Some of the local celebrities spotted amongst the audience included kilig couple Sarah Geronimo and Matteo Guidicelli (left frame).

“Manila, this is gonna be the best show I’ve ever done!”

Ed Sheeran and his guitar were all that's needed for his Manila concert to be a big hit.

No special AVP to set the crowd's mood. No special guests or intermission numbers for some breather or to buy him time to change outfits.

Nothing spectacular about the huge LED backdrop either, which for the most part showed a live streaming of the concert.

It was just a one-man show that highlighted the best of the British singer-songwriter's talent and ability to keep the crowd off their eight-thousand-peso seats, for the VIPs at least.

At 8:22 p.m. last night, March 12, Sheeran stepped on stage and started strumming to the beat of the first few lines of “I'm A Mess,” which speaks of a heartbreaker hoping to believe in love again.

Coupled with his powerful vocals and some music accompaniment (probably from his looper pedal), Sheeran pulled off his acoustic R&B stylings without boring the audience—far from it actually.

In fact, there was no greater compliment than having a full house, with roughly 20,000 fans singing along with him and knowing the lyrics of his songs by heart.

No big surprise there though since Sheeran is known for writing heartfelt and relatable tracks that won him 2015 Brit Awards’ Best Male Solo Artist and Best Album.

Sheeran was also hailed as Artist of The Year in the 2014 BBC Music Awards, thanks to the chart toppers from his sophomore album X.

“Thinking Out Loud” may be his most popular song to date, but he has other original ballads that have the Filipino audience lots of "feels."

In his performance of “Lego House,” the crowd couldn’t help but sing along these lines: "I'm out of touch / I'm out of love / I'll pick you up when you're getting down /And out of all these things I've done / I think I love you better now.”

The 24-year-old British singer-songwriter followed this with his upbeat song “Don’t” a song that requires him to rap some of the verses.

Interestingly, Sheeran’s inspiration behind this angry track—which says “don’t fuck with my love” in its lyrics—is his ex-girlfriend Ellie Goulding who reportedly cheated on him with One Direction’s Niall Horan.

At any rate, the British singer-songwriter brought the house down again with another popular breakup song of his, which is “Drunk.”

Sheeran further kept his Pinoy fans on their toes with a rousing mash-up of his rap song “Take It Back” and “Superstition.”

It’s a testament to his dedication to keep his music versatile and free flowing, just like what he says in the first line of “Take It Back”: “I'm not a rapper I'm a singer with a flow.”

Nevertheless, Sheeran raps with ease and swiftness that kept the crowd hushed and amazed at the same time.

At this point, he serenaded the crowd with his sweet love songs including “Photograph,” “All of The Stars,” “Kiss Me,” and “Tenerife Sea.”

“I didn’t plan on singing this,” Sheeran remarked before he crooned “All of The Stars,” include in the soundtrack of the film Fault In Our Stars.

Then he notched up the kilig "feels" among concertgoers with his chart-topping hit “Thinking Out Loud” that probably made everyone in the audience want to fall in love all over again.

No wonder MOA Arena was filled with celebrity couples headlined by Sarah Geronimo and Matteo Guidicelli, who were spotted getting extra cozy while watching Sheeran’s concert.

It was also a date night for Kapuso stars Janine Gutierrez and Elmo Magalona, who were seen together right before the show started.

Consistent and obviously self-sufficient on stage, Sheeran showcased more of his signature dramatic crooning and quiet acoustic strumming with “I See Fire,” originally written for the closing credits of Hollywood film The Hobbit: The Desolation of Smaug.

Pinoy fans, for their part, didn’t get tired of showing their love for Sheeran as he sang crowd favorites such as “The A Team” and “Give Me Love.”

The Brit singer even exclaimed at one point: “Hand on heart, this is the best reception I’ve ever had!”

He also treated the crowd with a mash-up cover of “You Need Me,” “In The Club,” and “Fancy.”

Leaving on a high note, Sheeran capped off his concert with his very own party song “Sing,” which is inspired by Justin Timberlake’s debut album Justified.

Even when Sheeran finally left the stage, the crowd stayed longer inside the arena and kept chanting, “We want more!”

Definitely a good enough reason for Sheeran to be back after his one-night-only concert at SM MOA Arena, on Thursday night, March 12.

“It’s my first time in the Philippines, and it won’t be my last,” he stated right before the end of the concert.