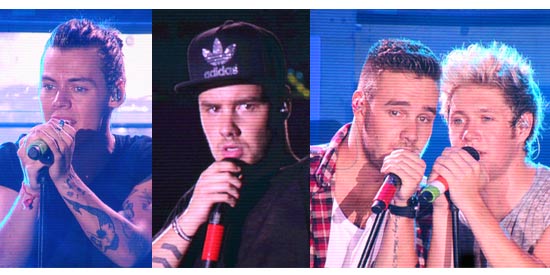 One Direction carries on splendidly with their first Manila concert on March 21 even without Zayn Malik. Harry Styles, Liam Payne, Louis Tomlinson and Niall Horan introduced themselves individually to Filipinos and not as One Direction. These photos were taken during the second Manila concert held at SM Mall of Asia Concert Grounds.

Thousands of Directioners – what fans of One Direction call themselves (and their chaperones) – waited patiently for hours last Saturday, March 21, to finally get the chance to see the famed Irish-British boy band.

Even if front act – DJ KC tried to keep them entertained, the excitement and anticipation was palpable. Everyone just wanted to get the show started on that mind-numbing humid Saturday night.

Finally, around 9 pm, One Direction concerts’ signature intro video rolled in. This year for their On The Road Again Tour, the intro video had an ‘80s vibe with its color pop execution.

When it was over, the boys of One Direction finally walked out onto the stage without Zayn Malik. Harry Styles, with his lovely long locks, walked out in a loose yellow button-down floral shirt; Liam Payne in a gray hoodie – which he later took off; Louis Tomlinson in a white sleeveless shirt; and Niall Horan in a plain black t-shirt while strumming his guitar.

Zayn Malik, the lone engaged member of the band, opted not to join the Manila and Jakarta shows to head home to the U.K., citing stress as his reason. But rumor has it that it might be because he was seen allegedly cheating on his fiancée Perrie Edwards of the British girl group Little Mix, with another blonde while the band was in Thailand. To add fuel to the fire, Zayn sent out this cryptic tweet last March 19, 2015,

“I'm 22 years old... I love a girl named Perrie Edwards. And there's a lot of jealous fucks in this world I'm sorry for what it looks like x”

1D MINUS ONE. The band did the sweetest thing and introduced themselves individually as Liam, Louis, Niall, and Harry, and not as One Direction. Just like their November 2014 Today show performance in Orlando where Zayn was also absent, they did the very same thing for they believe they are not One Direction without Zayn.

Fans seemed to believe so too as some held up Zayn face masks while chanting his name throughout the evening.

Despite missing the member known to sing the high notes, the boys carried on the show quite well. Each member took turns singing Zayn’s parts like with Harry taking on Zayn’s in “Little Things” and “Story of My Life”; Liam hitting Zayn’s high notes in “You and I”; Louis sang Zayn’s parts in “Where Do Broken Hearts Go” while Niall did his verses in “Night Changes.”

The ecstatic fans – perhaps just wanting to get a good look at their idols – kept standing on the plastic chairs provided despite being told by the organizers not to.

At the start of the Manila concert, the voice on the PA system warned the crowd that it would stop the show if anyone would be seen standing on a chair. But obviously, it fell on deaf ears. At one point, Harry Styles himself threatened the crowd, “If you keep standing on those chairs, I will arrest each and everyone of you.”

The boys performed songs from all their four albums but mostly from their current album Four which includes “Steal My Girl,” “Night Changes,” and “Stockholm Syndrome.”

In the middle of the show, Liam read some of the signs held up by the fans. One of them even read “Ditched Paris for you.”

Apparently, March 21 also happened to be the birthday of one of their crew members. The boys called one of their people – it does take a village to keep these guys on tour – on stage and did their best to embarrass the lady. It was supposedly her birthday and the boys – with the rest of the audience – sang happy birthday to her.

Throughout the show, the boys cannot help but voice out that their Manila show was probably the hottest show of the On The Road Again tour. They noticeably kept on chugging down water in between songs.

Evidently there was a reason for the heat and humidity as later on in the show, it actually drizzled. The rain prompted some people to open up their umbrellas or take cover under some of the tents. Others donned plastic ponchos or baseball caps. But the audience mainly just stayed put and carried on enjoying the show.

Liam, Louis, Niall, and Harry did not seem to mind the rain as they went on singing, dancing, bouncing around the stage and the center catwalk. At one point, Harry even ended up lying down on the catwalk.

At one point, Harry became emotional when he expressed his gratitude for their Filipino fans. “We just want to tell you how much we love you one last time, you are absolutely incredible. Thank you so, so much for being our fans. We love you. We love you very, very much.”

After two hours, the show seemed to have reached its end as the boys left the stage and lights were turned off. Apparently, they just went backstage to change their outfits.

For their encore, Harry resurfaced in a plain t-shirt and had tied his hair in a sexy man bun. Liam came out in a plaid polo and a plain black shirt while Niall sported a white shirt with black sleeves. Louis, on the other hand, didn’t seem to have changed his clothes.

The night ended with Harry thanking their fans, “Thank you so, so much for being our fans. We love you. We love you very, very much.”

The concert ended with them singing their hit “Best Song Ever” which was then followed by fireworks lighting up the night sky.