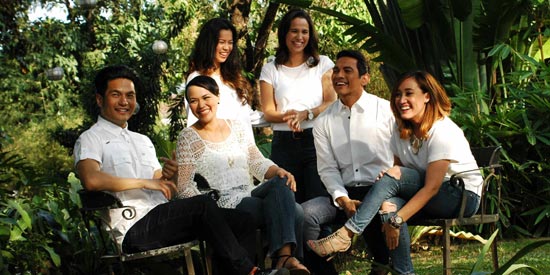 The song “The Reason We Sing” features the combined talents of Manila Genesis artists RJ Dela Fuente, Abby Asistio, Ella Pangilinan, Maricel Laxa, Gary Valenciano, and Julianne Tarroja, among others. This song will be officially launched on the official YouTube Channel of Genesis on Easter Sunday, April 5, 2015.

Gary Valenciano and other artists of Genesis have collaborated for a brand new song titled “The Reason We Sing.”

MANILA Genesis Entertainment and Management Inc. created the song “The Reason We Sing” in time for the 2015 Easter celebration. The song was written and originally recorded by The First Call and was arranged by Albert Tamayo and produced by award-winning producer Gary Valenciano together with senior recording producer Mike Jamir.

This project aims to solidify the reason why Genesis was established in 1986, exactly 29 years ago – to create content and represent and support artists who would use their skills and talents to excel in their respective fields and glorify God.

“Often times people forget the Giver of gift and the season is a timely reminder that Christ came so we may be forgiven of our sins. He has shared with the world a message of redemption and the resurrection’s restorative power. He carries for every life that needs to be set free from all the challenges that the world brings,” states Angeli Pangilinan-Valenciano, president of Genesis, who joined the artists in the video.

Angeli was a member of the band, Music and Magic, which was formed in 1979 to back-up the rising star Kuh Ledesma while partner Gina Valenciano-Martinez was one of the best dancers of Hotlegs in the '80s.

After 28 years of creating productions that have won awards and citations, Manila Genesis produced in 2014, projects like ARISE Gary V 3.0, co-directed by Gary himself and son Paolo, which was dubbed Concert of The Year by PMPC Star Awards for Music, the With You album which won Best Inspirational Album at the Catholic Mass Media Awards and got for Gary the Best Male Recording Artist Award at the 27th AWIT AWARDS (his 12th time to do so) and also garnered for him the PMPC Star Awards for Best Male Star Of The Night.

Gary's daughter Kiana, took the Most Promising Female Artist Award at Magic 89.9’s Countdown for her song “Dear Heart” while Julianne Tarroja won the Best World Music Award at the Awit for her collaboration with Sitti, “Pansamantagal” as well as Best Collaboration at the Myx Awards with Quest, for a Gab Valenciano production of the song "Digmaan."

Gab Valenciano, meantime has been rocking the international online community with his critically acclaimed super selfie videos and short films and recently was honored by YouTube as being one of the top 70 content creators of the world having contributed choreography for Beyonce’s 7/11 music video which has hit over 170 million views as well as producing and directing the latest music video of Jessica Sanchez.

Monique Lualhati of the phenomenal female vocal group AKA JAM made it to the top 8 vocalists in The Voice of the Philippines Season 2. Other recording projects include Silence/Noise by Paolo Valenciano, Ashes To Beauty by Julie Tarroja, the Life Songs album by Felichi Pangilinan-Buizon, When I’m With You by Abby Asistio, "Step Up" by AKA JAM, "He Carries Me With His Love" by RJ Dela Fuente, and "Panyo" by Acel.

The artists themselves together with the new media team of Genesis conceptualized the #RiseGenesis project which has for its very first attempt at group collaboration as Genepeeps, (which the artists fondly called themselves) the single project “The Reason We Sing."

“The Reason We Sing” will be officially launched on the official YouTube Channel of Genesis on Easter Sunday (April 5).