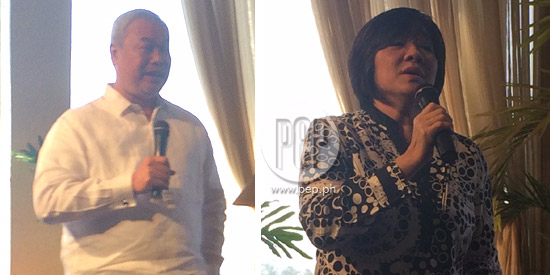 Danny Dolor—renowned banker, art lover, philanthropist and columnist—is working with the Cultural Center of the Philippines (CCP) to bring back an afternoon musicale featuring traditional Filipino music reinterpreted and renewed.

Sir Danny said that the tea time presentation targets primarily the senior citizens, "because they love those hours and even students who will appreciate traditional Filipino music."

Harana Sa Dapithapon will be presented once a month on a Wednesday starting March 11 at 4:30 in the afternoon. Sir Dolor sometimes feels he is indeed a voice in the wilderness, championing traditional Filipino music in the era of modern pop.

He admits feeling down, "many times because I have tried this before, medyo mahirap. But I still believe in these young people... that this music of our generation presented properly will really be appreciated. But sometimes I want to give up, honestly, but siempre the passion is still with me, hindi nawawala yung passion so I still try and try and try, sometimes I succeed."

The Harana sessions will include kundimans, harana, balitaw, danza and famous love songs written by Filipino composers, an afternoon primarily geared to attract the senior citizens, he says "for those who want to remember the songs of yesteryears."

For Sir Danny, the harana format remains relevant today, "this is supposed to be a sunset serenade for the senior citizens and students so we try hard to bring back memories, to bring back the music of yesteryears, we don't want the music to be forgotten so we try to present it in another form."

He said that they are doing their best to ensure that Harana "will appeal to those who are familiar with the songs and also young people who are beginning to appreciate and learn our traditions."

Chris Millado, CCP artistic director, shares that they are holding Harana free to the public and trying their best to make it appealing in presentation.

He explains, "it's making a connection between what's happening right now and what we call traditional Filipino music because our sources are the same and what people today call pop have their roots in songs that our grandmothers and mothers sang, these have very strong connections to our kundimans..."

The intention is also to keep the area of CCP relevant during those weeks when nothing is being shown or performed. Holding the Harana in the lobby allows the audience to experience CCP in a different way.

He adds, "the first time I talked about it, I wanted every Wednesday. But we want it to gain interest as we go along. At this point, it's nice to warm up the audiences to the show and see how this grows."

We wanted to know if dressing up in period pieces from this era is something they encourage or have thought about. Chris quickly answers, "this is one of the things we were playing around with because it is an experience not just sitting and watching, in the tradition where you gather for afternoon tea and then there's beautiful songs to accompany your tea, your meeting with friends, so we'll try to see if we could approximate that kind of feeling in the lobby and see if we could transform it into a big living room."

He then quipped, "if our young people can dig in to their mother's or grandmother's bauls and come in baro't saya, why not?"

Liza Cabahug, a soprano, will perform on the first Wednesday for the Harana series. During the press preview, she sang a Levi Celerio classic, a Francisco Santiago piece, a Visayan traditional folk song and the more contemporary "Gaano Kita Kamahal."

She shares what for her makes the songs of old special, "the lyrics and songs natin iba yung poetry, when we sing our songs, iba yun culture at way of life natin, yan yun nag radiate sa song."

Chris also explains that the Harana sessions can be considered a way to promote nationalism.

He says that kundimans were a truncated version of 'kung hindi man' where back then, "most of the times these songs speak of unrequited love, love that cannot be. The kundiman also began to carry messages of love for country and for a nation that cannot be yet at the time, that is why you have these kinds of nationalist kundimans and the song form was adopted in the present to contain messages of nationalism. The kundimans will not contain your direct political messages but it is expressive enough to communicate longing, it is longing either for a loved one or an ideal, a longing for a country."

Harana Sa Dapithapon bridges the gap between young and old, modern and traditional, and in a way, provides a regular cultural attraction that the City of Manila can offer its visitors. Although it was originally intended to be held outdoors in the driveway of the CCP, they decided to bring it indoors for now because of unpredictable weather during some months.

Chris says that the selected "songs were the songs of the youth of yester years, and have remained timeless in terms of message and melody, so they have survived."

Because of their timelessness, he hopes that Harana "catches on and not only in terms of audiences but it catches on din sa interest ng mga performers and singers."

After the intimate presscon we ask him to dream and share his wishlist of who could possibly join future Harana sunset sessions and he willingly obliged, "well can you imagine these songs being reinterpreted by the likes of Aiza Seguerra who sings beautifully, she reinterprets songs in a wonderful way and very soulful way with her guitar. I could hear the likes of sila Jed Madela, singing these songs and even our musical theater singing performers like sila Lea Salonga doing our kundiman."

He continues, "our well known musical theater artists, ang gagaling, most of them perform in English but what if we hear them sing our kundimans. Of course, our pop singers: the likes of Sarah Geronimo, although she's done a zarsuela with Piolo Pascual in Lagi Kita Mamahalin a few years back where they sang a song from Dalagang Bukid... so imagine, Sarah Geronimo and Piolo Pascual doing kundimans with us."

"Can you imagine our younger, hip hop artists reinterpreting our kundimans, bakit hindi. If you can gather all of them: a dream concert might be, can you imagine a night of kundimans but being sung by rock balladeers, crooners, that would be very interesting," Chris admits candidly.