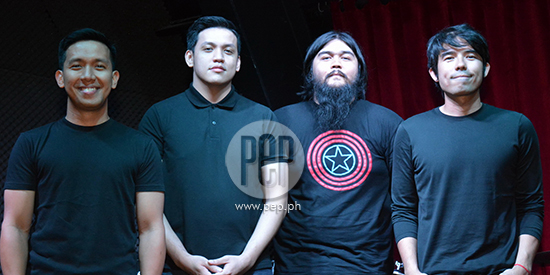 Champ Lui Pio on why Hale decided to release a 6-track album: “It’s not how it was before and we just wanted to focus on releasing singles that will stick, that’ll really affect people. And we wanted to have that focus na hindi siya paramihan pero it’s more of just having focused singles.”

Early this year, alternative rock band Hale surprised their fans with their comeback single titled “See You.” Now, the band has officially released the music video of their new single.

PEP.ph (Philippine Entertainment Portal) and other members of the press got a sneak preview of their latest music video at a gig held at 12 Monkeys Music Hall & Pub, Makati City last Friday night, March 27.

"SEE YOU." The music video, directed by Veejay Jimenez, shows the band performing their song inside a 360-degree venue. Champ told the press that the band decided to experiment for their comeback MV.

He said, “The place where we shot the video, it’s a 360-degree projector-ized place.

“So medyo, we kinda embraced the technology. It’s very dominant, obviously, in the video.

“And at the same time, since it’s our first music video in five years, we wanted to like just make it a performance video and show us that we’re back.

“And kind of reintroduce ourselves.”

Champ was also seen performing dynamically in the video, prompting members of the media to ask if he rehearsed before shooting. The 33-year-old musician answered, “Walang rehearsal. Everything is like impromptu, very spontaneous.”

The Hale vocalist continued, “While we were recording, I think I’ve told this during our first interview na, like the energy every time we’re playing right now is really high.

“Simple because we haven’t played in so long and I guess it shows whenever we play that we’re all really just happy to be back.

“And you know, it shows, whenever we’re playing, we’re [performing in a] gig, we’re shooting a music video.

TIME AND SPACE. Hale also released their new album titled Time And Space. Their new album comes with 6 original tracks and is now available on iTunes, Spotify, and Deezer.

“More or less naman, so far, mukhang we’re on the right track naman.”

Members of the media also asked why the band chose to release only 6 tracks instead of a full-length album.

Champ replied, “We acknowledge that it’s not 2005 anymore and we’re considering a lot of factors like change of listening habits of people.

“I don’t think people are listening to 12-track albums now.

“I think they’re more into singles and more of soundtracks for a certain time.

“For example, if it’s summer. More of, like that’s how music is right now.

“It’s not how it was before and we just wanted to focus on releasing singles that will stick, that’ll really affect people.

“And we wanted to have that focus na hindi siya paramihan pero it’s more of just having focused singles.”

The members of Hale recognize that their sound has grown more positive than their previous works. Roll explained, “‘Cause tumanda na kami, we grew up, we grew up. Before, siyempre mga bright-eyed naïve people, siyempre may romanticism pa.

With that said, the band is still firm in its belief to write lyrics based on what they feel and not hit a certain market audience.

Champ pointed out, “I think we’ve never been the type of band focused too much on like hitting a market.

“We’ve always been the type, you know, we would always write simply because it’s what we feel.”

Champ continued, “It was just a collection of the best songs we can release and for us, we’re not gonna try to write something because we want to hit the market.

“I think we’ve always been like heart-on-sleeve type of band and that’s still us, that’s still the goal ten years after.”