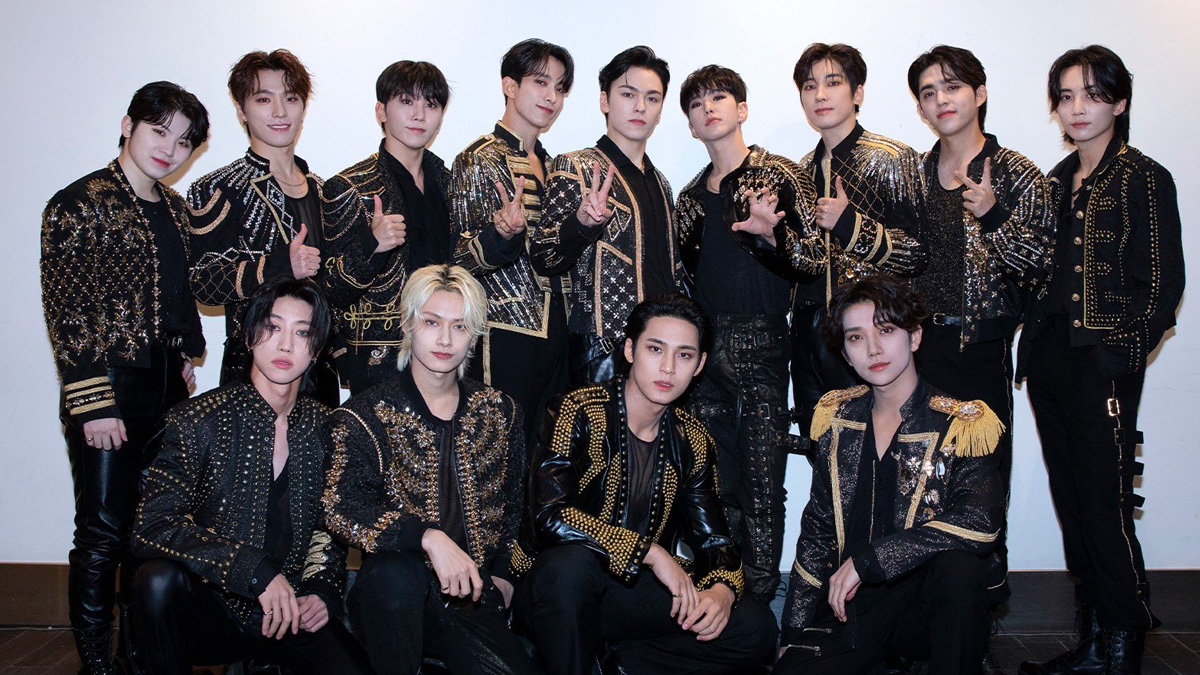 SEVENTEEN made history as the first K-Pop group to stage a solo concert at the Philippine Arena in Bulacan.

An estimated 50,000 Filipino CARATs (fandom name) flocked to the venue on Saturday, December 17, 2022, to watch the 13-member boy group perform their hits in the "world's biggest indoor arena."

The concert was organized by Live Nation Philippines in partnership with SMART.

This was actually SEVENTEEN's third time staging their Be The Sun concert in the country, following their two-night sold-out shows at the SM Mall of Asia Arena in Pasay City last October 8 and 9, 2022.

Here are the highlights of their concert.

SEVENTEEN: BE THE SUN BULACAN

Filipino CARATs also sang along and tirelessly waved their CARAT bongs (light sticks) while the group performed their songs "March" and "HIT."

After the first three songs, the group took some time to greet their Filipino fans.

While catching his breath, Hoshi welcomed their Filipino fans to the group's concert and said (with the help of a translator), "We told you guys we will be coming back!"

The group was also amazed to see all their Filipino fans in the arena, that even the group's leader S.Coups was speechless.

Seungkwan observed, as translated in English, "I think the leader got shocked because there are so many CARATs here right now."

Each member got the chance to introduce himself.

During his part, Joshua, who had an unplanned vacation in the country back in September 2022, expressed his gratitude towards the fans for their unwavering support.

He said, "It feels so great to be back here in the Philippines... and it's actually our first time coming to Bulacan so we're really, really excited for today.

"You guys filled up such a big arena. Thank you very much!"

Hoshi, on the other hand, greeted their fans in Tagalog, and said, "Philippine CARATs, mahal ko kayo!"

For the second part of the concert, SEVENTEEN treated their Filipino fans with their sub-unit performances.

The "Performance Team"—composed of Jun, The8, Dino, and led by Hoshi—showcased powerful dance moves with their songs "Moonwalker" and "Wave."

The "Vocal Team"—composed of Jeonghan, Joshua, DK, Seungkwan, and led by Woozi—serenaded the crowd with their performances of "Come To Me" and "Imperfect Love."

The "Hip-hop Team"—composed of Wonwoo, Mingyu, Vernon, and led by S.Coups—filled the stage with swag with their performances of the songs "GAM3 BO1" and "Back It Up!"

As a treat for their Filipino fans, the leaders of each sub-unit performed the song "Cheers," which was not a part of their two-night MOA concert.

For the third segment of their concert, SEVENTEEN regrouped and performed some of their chart-topping hits.

Before this, the members also had a mini-skit on stage with Vernon doing a quick cover of Le Sserafim's "Fearless."

Fans then sang and danced along with the group as they performed the songs "Mansae" and "Left & Right."

Midway through their performance of "Left & Right," Filipino CARATs screamed their lungs out after S.Coups said "I love you."

DINO and Seungkwan, collectively called by fans as BooChan, doubled the kilig when they told their fans "Mahal Ko Kayo."

The segment ended with their performance of "Very Nice (Aju Nice)."

For the final segment of the concert, SEVENTEEN performed their songs "Shadow" and "Crush."

The group also did a quick acapella performance of their songs "Clap" and "Don Quixote" which weren't part of the group's set list.

For their last full performance, SEVENTEEN rocked the stage with "_World."

Of course, their concert wouldn't be complete without an encore.

Joshua said, "Honestly, we love it here so much because of you guys. Thank you!"

For the encore, the group performed the holiday version of their song "Darl + ing," "Our Dawn Is Hotter Than Day," and "Snap Shoot."

Towards the end of the concert, each of the members was given time to bid farewell to their Filipino fans.

Mingyu promised to come back soon.

He said, "Be The Sun tour is coming to an end and it's really overwhelming. It's sad, right? but I'm very happy to meet you like this once more.

"I was surprised again with your energy. We'll be coming back soon again so always be happy!"

He ended his message by telling their Filipino fans "I love you!"

The concert ended with the group's "never ending Aju Nice."