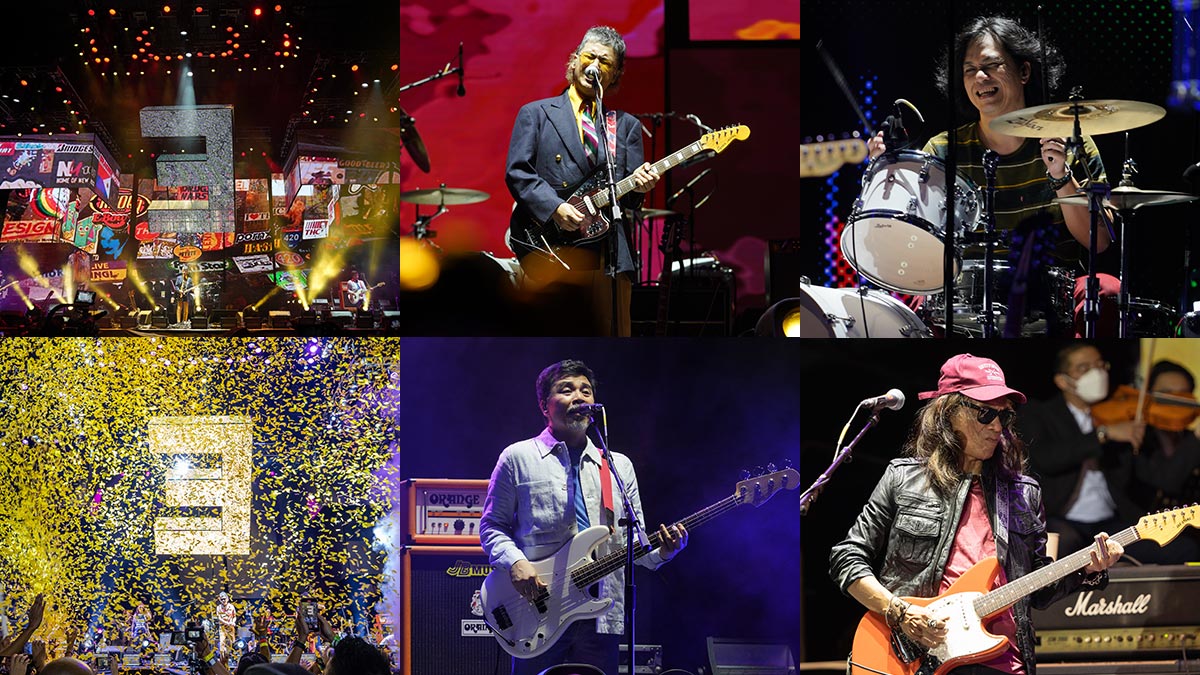 The Eraserheads, composed of Ely Buendia, Marcus Adoro, Buddy Zabala, and Raimund Marasigan, treated fans to a night of 90s nostalgia through their hits that define a generation.
PHOTO/S: Any Savvy Creatives and Entertainment Inc.

It’s been 33 years since Ely Buendia, Marcus Adoro, Buddy Zabala, and Raymund Marasigan decided to get together to form a band as college students at the University of the Philippines in Diliman, Quezon City.

At first, the quartet's intentions were nothing spectacular: to play the music they liked and catch the attention of the girls on campus.

Ten studio albums (full-lengths and extended plays), a slew of memorable hits, and heaps of accolades later, the once scruffy band from Diliman campus now known as the Eraserheads would gain the admiration of not just girls, but also of people from all walks of life across several generations.

The Eraserheads proved all that once more as they performed before a huge crowd of 75,000 people on Thursday, December 22, for their reunion concert dubbed “Huling El Bimbo” at the SMDC Festival Grounds in Parañaque City. 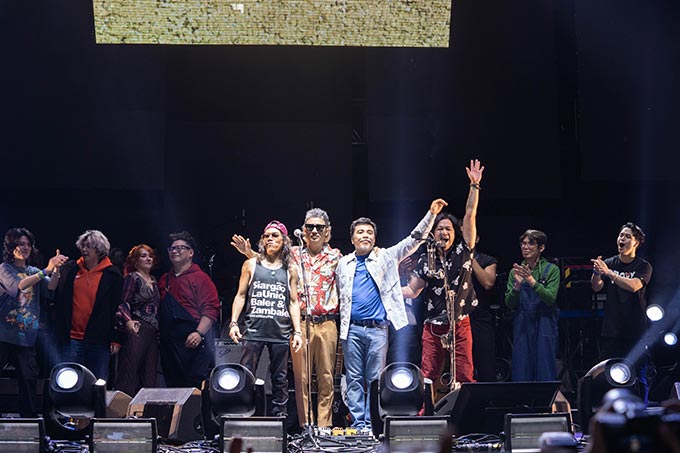 The air of anticipation was palpable inside the venue right from the moment the gates opened at 2 p.m. to fans who braved the Christmas rush to watch the iconic OPM band back on stage.

Opening for the Eraserheads an hour before show time was the DJ duo of Sandwich guitarist Diego Castillo and Pedicab frontman Diego Mapa, collectively known as The Diegos.

The pair's repertoire paid homage to the '90s, setting the tone for an evening of nostalgia.

While tunes like “Smells Like Teen Spirit” (Nirvana), “Sabotage” (Beastie Boys), “Cannonball” (The Breeders), and “Girls and Boys” (Blur) got the crowd moving, what got them singing and reminiscing were the OPM '90s rock anthems.

Songs like “Tsinelas” by Yano, Wolfgang’s “Halik ni Hudas,” Razorback’s “Payaso,” “Manila Girl” by Put3Ska, “Traffic na Naman” by Erectus, and “Laklak” by Teeth, made fans sing along and cheer.

A video collage of images and sounds related to the Eraserheads story was played on the huge screen to raise the excitement meter.

Ely, Marcus, Buddy, and Raymund got the ball rolling with the funky “Super Proxy” taken from the band’s third album Cutterpillow.

One of the show's highlights as revealed days before the concert was a holographic image of the late rapper, Francis Magalona.

Francis, who succumbed to acute myeloid leukemia in March 2009, was a good friend of the band and recorded the rap parts in the studio version of “Super Proxy.”

The hologram of Kiko (Francis' nickname) rapping didn't disappoint, leaving the audience in awe and with goosebumps as if the "Master Rapper" was really there in the flesh performing with the Eraserheads. 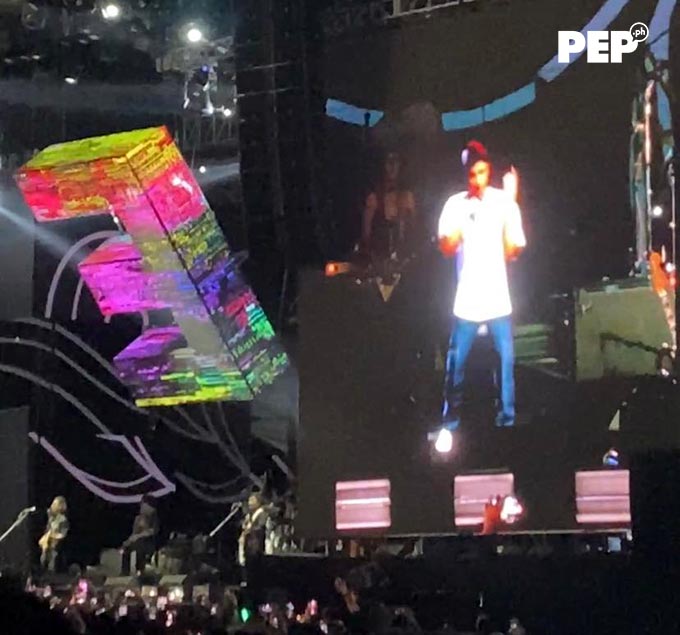 Elmo Magalona, Francis' son, also got up on stage to sing the track with the band.

He was joined by his younger brother Arkin and Ely's son, Eon.

The Eraserheads surprised fans by playing all the songs in chronological order from their album Cutterpillow, except for "Ang Huling El Bimbo" for obvious reasons.

It made sense as Eraserheads reached the pinnacle of their success with Cutterpillow, which certified the band as a prolific hit-maker when it was released in 1995.

Cutterpillow was the band’s most commercially successful album, having achieved 11 times Platinum status and the third biggest-selling album in OPM history.

Die-hard fans sang along to the non-singles in the album like “Waiting for the Bus,” Back2Me,” “Fine Time,” “Slo Mo,” and “Paru-Parong Ningning.”

As the band performed their abrasive and confrontational track, “Yoko,” the audience was reminded of the Eraserheads being nonconformist, a somewhat rebellious attitude that distinguished them from the mainstream. 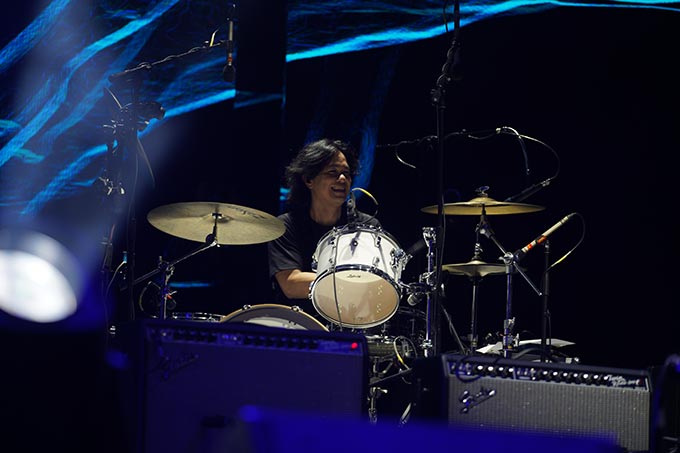 “Yoko” was written by drummer Raymund Marasigan as a sneer at the time when the Reserve Officers Training Corps (ROTC) program was mandatory in schools.

At the reunion concert, reprising the dissenting song was a poignant warning now that ROTC is making a comeback as an option among college students.

In typical Eraserheads fashion, the band played the songs in succession with hardly a banter or interaction with the crowd.

Armed with an acoustic guitar and performing solo, Ely made hearts swoon with the short but sweet “Fill Her," asking the people to sing along heartily with him. 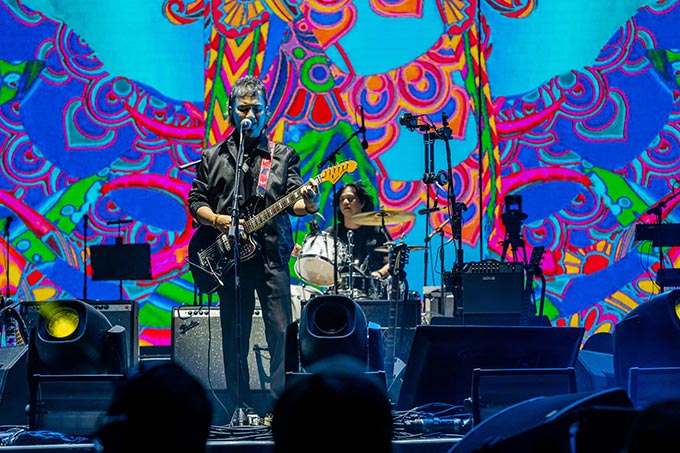 With the Cutterpillow surprise out of the way, the band came out of the gate swinging for their second set starting with the catchy “Pop Machine” from the album Natin99.

Next on the list were “Sembreak” and “Sabado,” the 2014 track that the band recorded for Esquire Philippines and jokingly referred to by the band as their “latest single.”

Fans sang along and dance to the beat of “Ligaya,” which was the band’s breakthrough single released in 1993 as part of their debut album, Ultraelectromagneticpop! 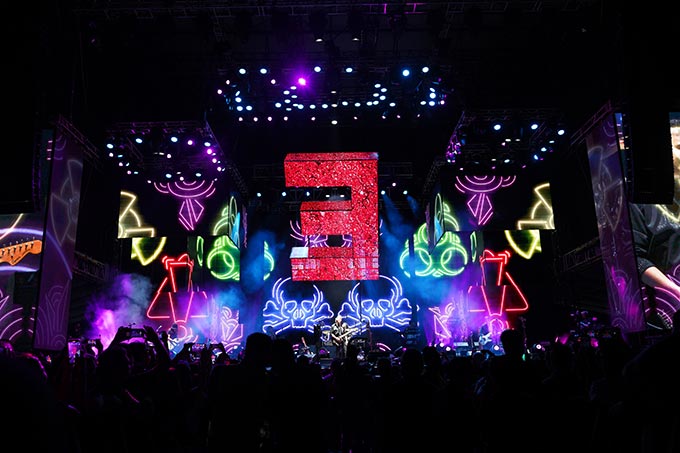 Joining the band in playing the heart-wrenching but beautiful “Lightyears” was an 18-piece orchestra led by musical director, Mel Villena.

Interestingly, it was Mel who did the strings arrangement for “Lightyears” in the Fruitcake album released in 1996, making his presence in the concert a reunion as well with the band members.

Trust “Maling Akala” from the band’s debut album Ultraelectromagneticpop! to get the crowd's feet and body moving, helped even more by the horns section accentuating the song's ska and reggae feels.

The song was written by Buddy and the band's former manager, and now wife, Earnest. 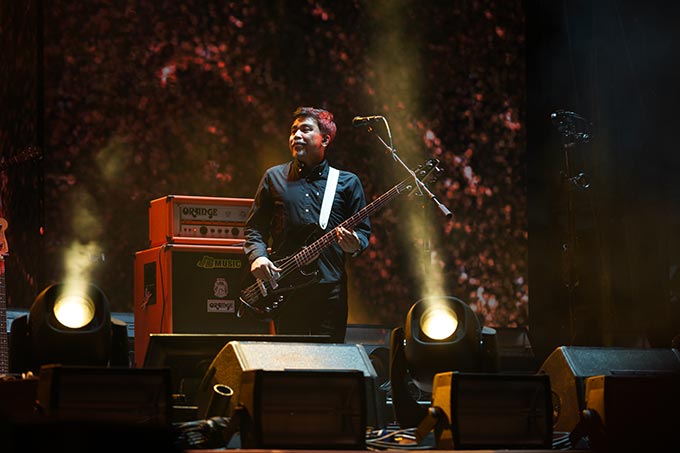 Buddy rarely sings during his Eraserheads days but did record a few tracks as the main vocalist on some of the band's albums.

Nowadays, the amiable bassist sings for Ultracombo, the band that he formed with Raymund that plays Eraserheads tunes.

Including “Tama Ka” for the night’s set list was a welcome surprise for ardent fans who felt that the album and the songs in Natin99 remain underappreciated.

Ely looked back on the crippling pandemic and thanked the fans for inspiring the band to “get back” even for a brief moment.

"It's great to be back on stage, with all of you. Thank you very much. You have all inspired us during the darkest times of the pandemic, and we're very honored that this song was chosen as an inspiration to everyone," Ely said to the crowd before singing the moving "With A Smile" from the band's sophomore record, Circus.

The venue was filled with Ely’s and the audience’s voices as they sang the words of the song in unison. 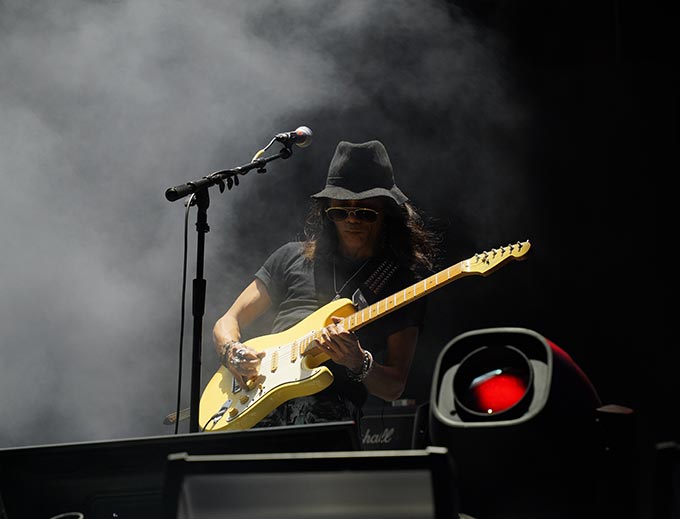 It was a cathartic number very much needed to keep everyone's energy level up.

Gary sang the parts originally recorded by Francis Magalona for the album, Fruitcake, and passed the test with flying colors.

The band closed their second set with the cryptic “Spoliarium” and the anthemic but funny “Magasin” from the albums Sticker Happy and Circus, respectively. 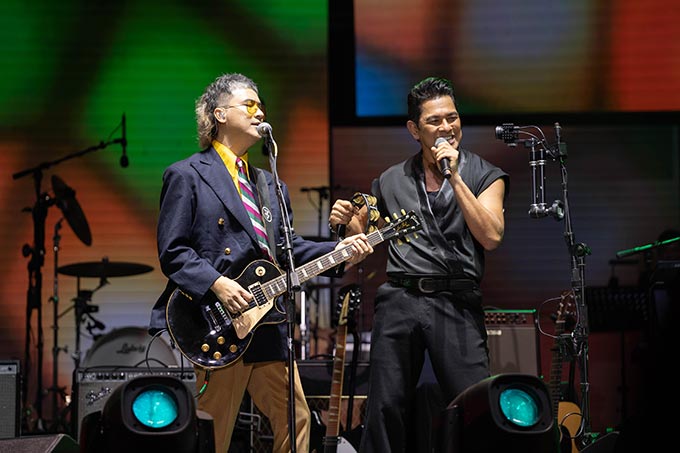 FINISHING WITH A BANG

The Eraserheads closed the evening by playing their more memorable songs starting with “Pare Ko.”

You know what’s coming when the chorus hits, and the audience gladly obliged screaming “T***g ina!” at the top of their lungs as if exorcising past heartaches.

Ely and the gang proceeded to play the nostalgic “Minsan” with an orchestral backdrop.

"Minsan" became a contentious subject among fans last year after Ely stated that the song was not about his relationship with his former Eraserheads bandmates, but rather about his dorm friends in college. 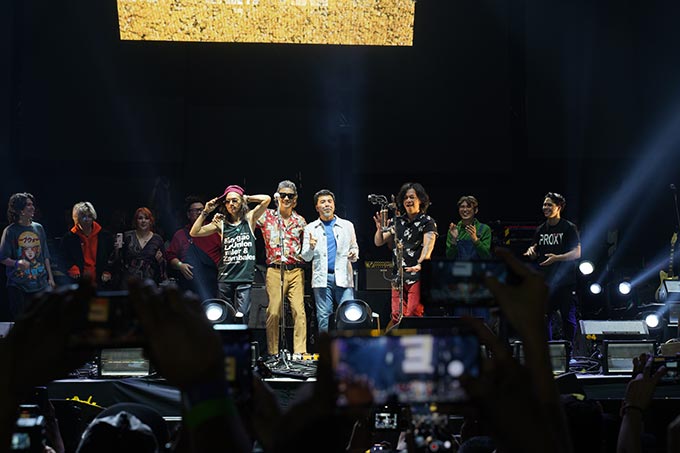 The soaring and controversial “Alapaap” got the crowd jumping and roaring as the distinct riff from the band's "ode to freedom" reverberates from the speakers.

To finish off the night, the Eraserheads played the tragic and melodic “Ang Huling El Bimbo” with help from the singing, adoring crowd.

As a finishing touch, the original "El Bimbo" instrumental from the '70s was played repeatedly in the background while the band and guest musicians gathered at center stage during the curtain call.

“Huling El Bimbo” lived up to the hype and the amount of production work incorporated to go with the music was a success in the eyes of many attendees.

The vibrant, colorful lights that emanated from the stage and giant LED screens made the concert a visual treat for the audience as well. 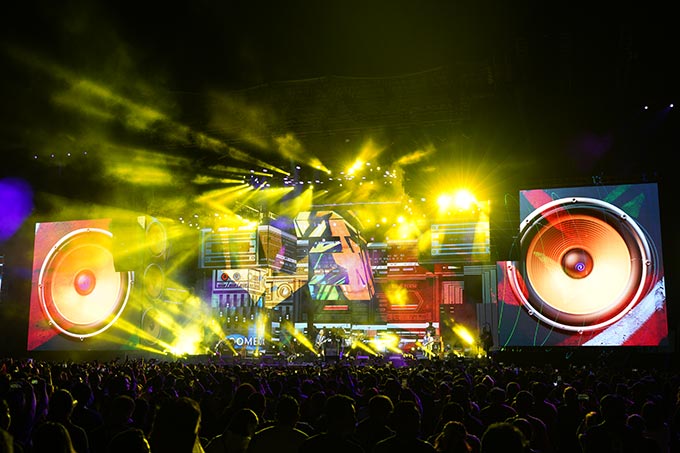 More importantly, the band looked and sounded sharp throughout the evening.

Ely’s voice sounded good and well-rested to endure the long set. He looked genuinely happy and appreciative of the fans that came that night to see the band.

Raymund played steadily and at a controlled tempo. This was deliberate, said the drummer on his YouTube vlog, so as not to push the band's playing to overdrive as was the case in their past shows pre and post-breakup.

This benefitted Ely's voice tremendously as he was never out of breath when singing, allowing him to relax and focus throughout the performance.

Marcus played the riffs and leads nicely, signifying that he polished his chops for the reunion concert despite dealing with personal issues.

Buddy, as usual, was solid and his bass lines gave the songs extra melodic undertones and grooves while keeping the beat firmly in place.

Kudos to auxiliary musicians Audry Dionisio (General Luna), Mikey Amistoso (Ciudad), and Jazz Nicolas (Itchyworms), the horns players, backup singers, and the full-band orchestra, for adding another layer to the songs beloved by many.

For one night, Ely, Marcus, Buddy, and Raymund once again stood at the summit of the OPM mountain, staking their claim anew as arguably the most influential Filipino rock band in Philippine music.

Their horde of fans might not see another local act like the Eraserheads again, whose arrival on the scene in 1993 opened the doors for many Pinoy rock bands, changing the landscape of OPM in the process.

The band's impact continues to be felt even today.

And if this was indeed their last big reunion concert in the Philippines, the Eraserheads triumphantly gave fans another reason to remember them by.

Waiting for the Bus

The Eraserheads "Huling El Bimbo" was produced by WEU and Ant Savvy Creatives and Entertainment Inc., with Smart, PLDT, and Maya among the major sponsors.